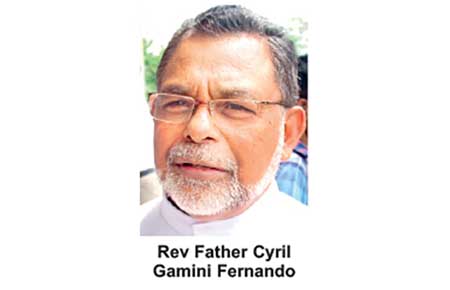 ‘Some of those suicide bombers are still at large…’

Reminding the congregation that the Katuwapitiya Church targeted by a Zahran follower was situated just a couple of miles away from St. Anne’s Church, Rev. Fernando said that in addition to those who had pledged to mount suicide attacks being still at large, there were religious extremists roaming the country and thousands of swords and draggers imported into the country in the run-up to the Easter carnage were still unaccounted for.

Rev. Fernando, a former spokesperson for the Church, said that places of religious worship as well as any other place frequented by the public could be targeted.

Referring to the Presidential Commission of Inquiry (P CoI) into the Easter bloodbath, Rev Father Fernando said that the Church was yet to be convinced that the government was on the right track to identify Easter Sunday architects.

The priest reiterated that the Catholic Church’s commitment to pursue the matter until the government apprehended all those allegedly involved in the conspiracy. Rev Fernando questioned the failure on the part of the government to take into custody Easter Sunday conspirators.

A dire warning as regards suicide bombers’ presence amidst the public was delivered close on the heels of the end of a three-day parliamentary debate on the Easter attacks with Samagi Jana Balavegaya (SJB) urging the public not to target the entire community for heinous crime committed by a few.  SJB Colombo District lawmaker Mujibur Rahman appealed that the entire community shouldn’t be held accountable for the Easter Sunday carnage.

Rev Father Fernando said that special three hour prayer service would be conducted beginning 9 pm Sunday, March 28 in the churches in the Diocese of Colombo to underscore the need to take tangible measures against those responsible. Multiple blasts claimed the lives of 270 whereas 500 received injuries. A senior spokesperson for the Archbishop’s House told The Island that the Dioceses countrywide would back their initiative.

The Catholic Bishops’ Conference of Sri Lanka recently demanded the release of the entire set of P CoI documents to Attorney General Dappula de Livera, PC, following a meeting Livera had with Archbishop of Colombo Malcolm Cardinal Ranjith where they discussed the government’s decision to hold back 22 volumes on the basis of threats to national security. In the wake of the Church protest, the President’s Office delivered the entire set to the AG.

Rev. Fernando said that the national security was at stake as long as the extremists retained an arsenal consisting of suicide cadres. The priest said that no one would be safe until they were apprehended.

Police investigations have revealed that those who took an oath before Zahran to mount suicide attacks in support of their macabre cause included some women.

Lawmaker Rahman told The Island  that the government should make a genuine effort to solve the mysterious disappearance of Katuwapitiya suicide bomber Hasthun’s wife Sarah, who had been with Zahran group’s rump. “We are not satisfied with the government’s efforts to track down her against the backdrop of claims she fled to India with the help of those who conspired.”