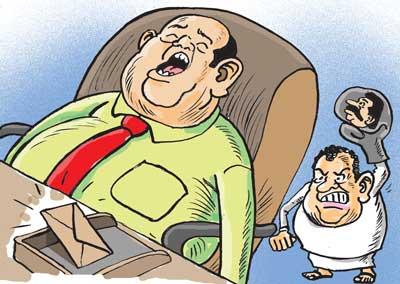 A government Diyawanna politico had aired a grievance about the strange fate the befell a complaint he had made, at a group meeting held the other day with Number Two in the chair.

This politico following a request from higher authorities that complaints about the white-collar high-ups who fail to follow the Government policies and are remiss in carrying out the functions entrusted to them, be made to the subject Ministry, had made a complaint against a Divisional Secretary in his area.

He had said in his complaint that this white-collar high-up was obstructing the work of the Government in his area and therefore he is transferred out. He had made this complaint to the Secretary of the Ministry dealing with the disciplinary matters relating to the Divisional Secretaries.

The District Secretary had in turn referred the complaint to the Divisional Secretary who happened to be the very person against whom the Diyawanna politico had made the complaint!

Having aired his grievance, the Diyawanna politico had launched a scathing attack on the conduct of the Ministry’s top executives and several other Diyawanna politicos too had spoken endorsing the views expressed by the Kegalle District politico, they say.