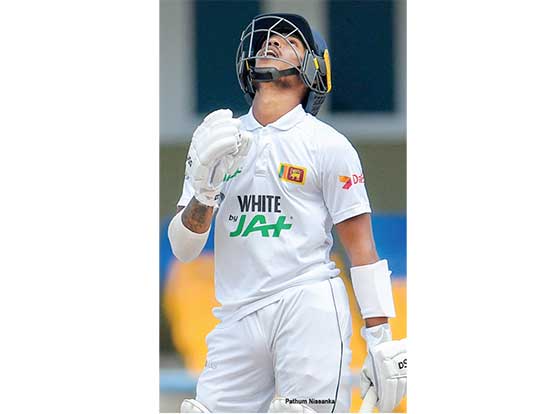 There have been very few positives to write about our cricket team in recent times, but watching the first Test in Antigua was fully worth burning the midnight oil as young Pathum Nissanka became the fourth Sri Lankan to score a hundred on debut. This is a guy who has averaged 67 in First Class cricket over the last three years. Okay, we know records in our First Class cricket aren’t much to boast about, but such stats were worthy of earning someone a maiden Test cap because our stars aren’t exactly covering themselves in glory.

After being snubbed for the ICC Under-19 World Cup despite being a prolific run-getter, Pathum Nissanka Silva kept pursuing his dream by piling up hundred after hundred for NCC before finally being drafted into the senior side ahead of the tour of the West Indies. If his on-field exploits have been stirring, his off-the-field story is even more heart touching.

Sunil Silva, Pathum’s father, was the ground boy of Kalutara Esplanade, the cricket ground in the heart of the town. The ground is not visible from the road, but if you happened to travel to Galle or Matara by train, you cannot miss this ground. Having a bit of cricket knowledge made Sunil his son’s first cricket coach. They lived in abject poverty and to make ends meet, Pathum’s mother sold flowers near the Kalutara bodiya (temple) to devotees.

Colombo schools are constantly on the lookout for fresh faces, asking District Coaches to keep them in the loop if there’s any bright talent around. Pathum was making big runs for Kalutara Vidyalaya and quite a few schools including S. Thomas’ College, Mount Lavinia were interested in him. But it was Isipatana that got to him first. It was quite a struggle.

Sunil Saluwadana, the brilliant cricket coach of Kalutara Vidyalaya, reluctantly agreed to let him go so that he could make progress in Colombo, but convincing his parents turned out to be not so easy. Not that they didn’t like the move to Colombo. It was just that locating their tiny house turned out to be a nightmare for the visiting party.

Isipatana Coach Pradeep Nishantha had travelled with one of his friends, Nilantha Amarasinghe, whose son captained Isipatana recently. As they were struggling to locate the house, Pradeep asked Pathum’s parents to come to Kalutara bodiya. It was at the bodiya that Pathum’s admission papers to Isipatana were signed. That both his parents didn’t have even basic education is a different story. “Not too sure whether any other child has signed his admission papers at Kalutara bodiya. This is the greatest blessing you can get. You will have a bright future,” Pradeep recalls telling young Pathum five years ago.

To reach Pathum’s house, you have to turn left from Kalutara junction and go some six kilometers along the Palathota road. He lives in one of the government-built houses for people affected by the tsunami.

Colombo life is hectic and expensive too. Pathum needed some assistance to make ends meet. While Isipatana College’s Junior Old Boys’ Union did chip in, that wasn’t enough to meet costs. So his coach turned to his friend Nilantha Amarasinghe. Nilantha is employed at Jayaratne Florists, and apprised his bosses of this bright prospect. The premier florists helped him with a monthly allowance. They were the happiest to know that young Pathum had been picked for the tour of West Indies and gifted him Rs. 250,000 as pocket money during his visit to the Caribbean.

After finishing up at Isipatana, Pathum went back to Kalutara and represented Badureliya CC.  Then, former Test captain Hashan Tillekeratne persuaded him to make a shift back to Colombo to play for NCC.

Not just asking Pathum to make the move, Hashan made sure he looked after the boy, treating him like one of his own sons. NCC has a reputation for looking after young talent from outstation. Another tradition at NCC is to treat everyone as an equal – seniors and juniors all get paid the same amount. It helped that he had some very good seniors in the club like Upul Tharanga, Dinesh Chandimal and Angelo Perera.  There were good mentors at the club as well like Ranjit Fernando, Malan Ranasinghe, Duminda Perera and Leslie Hewage.

There were temptations, of course. There is this notion that you have a better chance of representing Sri Lanka if you cross the road from NCC. More recently, another neighbouring club of NCC has got more political clout, with one of our former Test captains calling the shots at the Sports Ministry. So the done thing these days is to jump over the fence of NCC and not cross the road. But Pathum remained loyal to NCC, and has been richly rewarded.

Often, when things go well, we tend to forget that there are issues which need to be addressed. Here’s one of them. Pathum has been a top-order batsman all his life. Why Sri Lanka played him at number six is beyond comprehension.

There was similar hope when Kusal Mendis came on to the scene in 2015. A son of a three-wheeler driver, Kusal’s was a case of sheer hard work being able to take you places, irrespective of your social status. But Kusal’s father has turned out to be such a social menace that he is not only influencing senior police officers but is alleged to be threatening victims as well after his notorious son’s infamous hit-and-run last year.

It is very important that when young players earn millions on a monthly basis, they are properly guided. Most agents who are managing players only bother about promoting their images on social media. Values mean nothing to them. Hence, we are left with incorrigible youngsters like Kusal Mendis. Let’s hope Pathum’s story will be different. Sri Lankan cricket needs it to be different, badly.