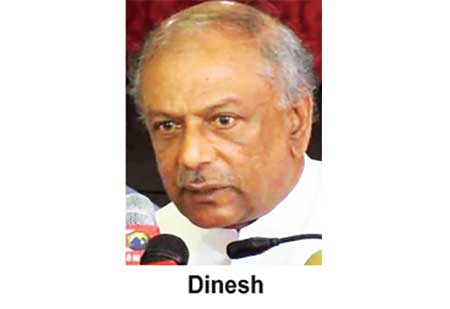 The government yesterday told Parliament that the recently ratified UNHRC resolution against Sri Lanka was illegal.

Minister Gunawardena said that Sri Lanka was a sovereign state and the government would protect the country’s sovereignty.

Gunawardena said that the new resolution had not been backed by a majority of the UNHRC members.

Minister Gunawardena tabled the resolution in Parliament along with details of the co-sponsors of the document.

However, the Minister said that Sri Lanka would continue to engage with the UN agencies.

The resolution co-sponsored by the former government had been a great betrayal, the Foreign Minister said, adding that the Government would address accountability issues in Sri Lanka through a domestic mechanism.

Given below is the full speech the Foreign Minister made in Parliament:

The United Nations Human Rights Council in Geneva adopted by a vote, the draft Resolution titled “Promoting reconciliation, accountability, and human rights in Sri Lanka” (A/HRC/46/L.1/Rev.1) tabled by a ‘Core Group’ of countries, on 23 March 2021 during its 46th Session. Out of the 47 Members of the Council, 22 countries voted in favour, 11 voted against and 14 abstained. It is implicit from the voting result that the majority of the Council did not support this Resolution.

“I have provided a briefing on this matter to the Cabinet of Ministers itself.

“The very first sentence of the Resolution states: “Guided by the purpose and principles of the Charter of the United Nations…” Having said so, the Resolution goes on to violate Article 2 (7) of the Charter which states: “Nothing contained in the present Charter shall authorize the United Nations to intervene in matters which are essentially within the domestic jurisdiction of any state…”

This intervention denies a state the right enshrined in the Charter and other UN instruments in respect of the right of its People to choose its system of governance, developing the institutions to govern it, and developing arrangements to meet national challenges such as the COVID-19 pandemic in keeping with its civilizational values within provisions of the Constitution.

“Acting beyond the Mandate granted to the UNHRC by UN Resolution 60/251 and recognize the importance of preserving evidence. Instead, to promote and protect Human Rights; to make recommendations relating to human rights violations; and be guided by “universality, impartiality, objectivity and non-selectivity”.

“This Resolution against Sri Lanka is pushed forward at the behest of a few countries, representing one part of the world without the consent of Sri Lanka. It is therefore unhelpful and divisive. There is no moral right to interfere into affairs of a sovereign country in this manner.

“No country has a greater interest in bringing about reconciliation among its peoples than Sri Lanka – a point that has repeatedly been emphasized during proceedings of the Human Rights Council.

“The list of co-sponsors of the resolution amply demonstrates the divisive nature of such “country-specific” initiatives and it is clear from the result of the vote that there is no consensus within the Council on this resolution.

“The resolution adopted on 23rd of March is intrusive of the sovereignty of the people of Sri Lanka and the core values of the UN Charter. It will have an adverse effect on the ongoing efforts to maintain peace, reconciliation and economic development in the country. It will lead to polarization of Sri Lankan society, contrary to the insistence of its proponents that it will bring about reconciliation.

“Sri Lanka categorically rejects the unprecedented proposal in this resolution to expand the role of the OHCHR. This sets a dangerous precedent and will have wide ranging implications for all countries. The Council cannot assume tasks not assigned to it by the UN General Assembly in resolution 60/251 or subsequent resolutions.

“This Resolution is based on the rejected report by the UN High Commissioner for Human Rights on Sri Lanka presented to the 46th Session of the HRC which violates the principles of sovereign equality of all states and non-interference in internal affairs. The Government of Sri Lanka has rejected this Report pointing out that, among other things, it is one-sided and exceeds the mandate of the UN Human Rights Council. It contains sweeping recommendations unsubstantiated and unwarranted comments of essentially political nature which no self-respecting sovereign country can accept. It has been compiled within months after the formation of a new Government in Sri Lanka, without any field visit, while the whole world was grappling with the ongoing global pandemic.

“A well-orchestrated propaganda campaign was launched against Sri Lanka ahead of the 46th Session of the Human Rights Council. This campaign was carried out with extensive focus on Sri Lanka while reports pertaining to the situations in over 10 other countries were presented at the 46th Session of the HRC. The synchronized content of the propaganda against Sri Lanka and the exploitation of the OHCHR mechanisms in doing so, demonstrated a clear case of a pre-meditated endeavour.

I wish to recall that last year I have briefed this House of the reasons which led to the withdrawal from the co-sponsorship of the HRC Resolution 40/1 and its preceding Resolutions 34/1 and 30/1, which was announced at the 43rd Session of the Human Rights Council in February last year. It is unfortunate that the unconstitutional action of co-sponsorship of a resolution against Sri Lanka by the previous Government brought to a halt the comprehensive post-conflict development process which included a domestic reconciliatory process.

“This new Resolution in an unwarranted manner seeks to interfere in all matters that are domestic affairs of a sovereign country. We questioned the members of the UN whether Sri Lanka represents a case warranting the immediate attention of the Human Rights Council. Sri Lanka has only defeated a secessionist terrorist campaign, and acted within its legal rights to defend its territorial integrity.

“Sri Lanka regrets that this Resolution seeks to create a perception of discrimination and marginalization of its people which is far from the truth. Issues affecting the people of Sri Lanka are common to all people irrespective of their ethnicity or religion. The Government is determined to achieve its main targets to improve the lives of the poor despite these distractions.

“No sovereign government is bound to work according to external prescriptions but be guided by the democratic aspirations of its own people. Sri Lanka has a well-established, time-honored legal system which is capable of ensuring dispensation of justice according to the constitution of Sri Lanka.

“The government remains committed to protect those who have made immeasurable sacrifices to neutralize terrorism, protect the territorial integrity of the country and to regain for all people in Sri Lanka the most cherished of all rights, right to life.

“It is regrettable that the proponents of the Resolution seek to create an ambiguous mechanism with funds of millions of USD at a time of severe financial constraints faced by the UN. We call upon the proponents of this Resolution to divest the money allocated for the implementation of this unprecedented proposal to improve the lives of the people affected by the conflict. This huge amount of funds is sufficient to build thousands of houses in the areas affected by the conflict, possibly to vaccinate the population of the entire Jaffna peninsula against the Covid19, or to provide to a whole Province, drinking water.

“As I mentioned earlier, I made the position of the Government on this politically motivated process on the country clear, and undertook deliverable commitments in keeping with Sri Lanka’s domestic and international obligations, at the 43rd Session of the UN Human Rights Council. The Council has been well briefed on all measures taken and the progress made under challenging circumstances amidst a global pandemic within the relatively short period of time since then. We have provided detailed updates to the OHCHR in December 2020 as well as in January 2021 on the progress of implementation of commitments that Sri Lanka had undertaken such as continuity of the existing mechanisms, appointment of a special commission of inquiry headed by a Supreme court judge, achieving the SDGs, progress made in returning lands, demining and creating new avenues of livelihoods.

“Reasons for this political campaign against Sri Lanka may vary from their domestic electoral compulsions to geopolitical interests. It is regrettable that countries with vested interests seek to achieve their political and strategic ambitions either through political destabilization or economic deprivation of the less influential countries of the global South, using the Human Rights Council as a tool.

“We are aware that some of the countries which stood by Sri Lanka at this vote withstood immense pressure on them in doing so. We thank all countries who braved such adversity to reject the Resolution.

“We are also mindful that some of Sri Lanka’s sincere friends were constrained to abstain. We thank them also for sharing with us their principled stands, and remaining neutral. In this context, Sri Lanka is of the view that this vote provided an opportunity for the member countries of the United Nations to re-assess whether the Human Rights Council is keeping with its guiding principles or not.

“Despite the vote of this Resolution against Sri Lanka, Sri Lanka will pursue its domestic mechanisms aimed at bringing about reconciliation and a lasting peace. As briefed earlier Sri Lanka will continue to engage constructively with the UN and its agencies in the same spirit of cooperation that have stood for over six decades for the betterment of its people, including through the achievement of Sustainable Development Goals, in keeping with domestic priorities and policies as well as international obligations and undertakings.”