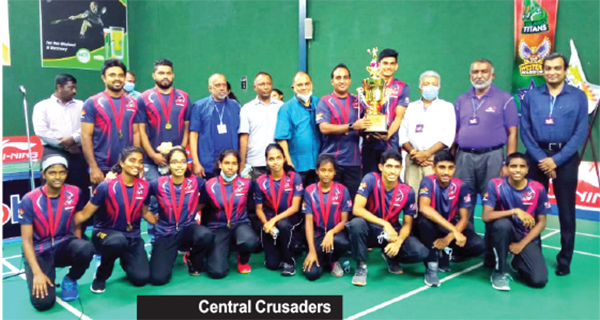 Goonathilake paired Hasara Wijeratne and Lahiru Weerasinghe to win the mixed doubles and the men’s doubles ties respectively to set the stage for a huge up set. Dumindu Abeywickrama out played Southern Stars skipper Sachin Dias in a thrilling men’s singles which was decided in three sets. In the boys singles Sethum Perera won against Kaviru Sanjitha as Crusaders won 4-2 to disappoint their opponents who were the only unbeaten team of the tournament.

The only victories for Southern Stars were recorded by Hasini Ambalangodage who won the women’s singles and Panchali Adhikari who won the girls’ singles.

Men’s singles saw Abeywickrama turning tables on Sachin Dias. After suffering 11-21 defeat in the first set, Abeywickrama came back strong to make it 21-17 and take the match to the third set where he cruised to 21-2 win.

Things went wrong for Sachin Dias in the men’s doubles as well, as Goonathilake and Weerasinghe beat the daylight out of Southern Stars recording 21-9 and 21-19. With an unassailable 4-2 lead the women’s doubles became a dead rubber.

It was a huge turn around for Crusaders in the final as they reached the business end of the tournament as the third placed team behind Southern and Western Warriors.

Southern Stars, had topped the table to book a direct ticket to the semi-finals after an unbeaten run. They overcame Western Warriors, led by Kavidi Sirimanage with a margin of 4-2.