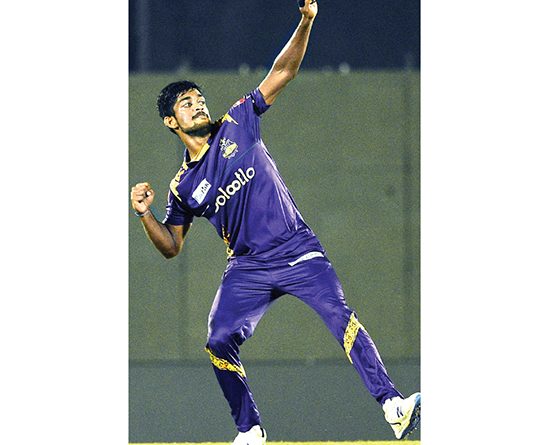 There was a major upset in the Lanka Premier League yesterday as table toppers Colombo Kings were sent packing by Galle Gladiators, who won a thrilling contest to book their place in the finals of the competition. Chasing a target of 151, Galle Gladiators won with two wickets to spare in the penultimate delivery of the game.

Dhananjaya Lakshan, a seam-bowling all-rounder from Richmond College, Galle emerged the match winner when it looked all lost for Galle. When the in form Danushka Gunathilaka was dismissed cheaply too much was left to be done and Lakshan rose up to the occasion admirably.

He had taken two wickets earlier in the day and then contributed with 31 runs not out as Colombo Kings cracked under pressure. He is only 22 and with his performance in this competition will come into the consideration of national selectors. He was named Man of the Match.

Bhanuka Rajapakasa, who stepped up as captain in the absence of Shahid Afridi was brilliant as well.

Galle started off the campaign poorly losing five games in a row. But towards the tail end of the league stage, they gained momentum and now they are in the final.

It all looked impossible at one stage. After their back to the wall effort in the must win encounter against Kandy Tuskers, Galle Gladiators had momentum behind them and it was a commendable effort to restrict the opposition for 150 runs.  But the run chase was a farce and running between the wickets was comical.

Shehan Jayasuriya is said to be the guy who didn’t get a fair run at the senior level despite excellent records in domestic cricket. LPL was a perfect opportunity for the 29-year-old to make an impact but his performances were hardly inspiring. Jayasuriya first ran his partner out before throwing away his wicket – run out trying a cheeky single to point. There was a misfield and he attempted a suicidal run.  The old saying, ‘never run on a misfield unless there’s a run and half of it’, came to mind.

Lakshan was a sensation taking some calculated risks. The winning runs were scored by the other Lakshan though – Sandakan.

Sandakan was impressive with the ball too claiming three wickets. Wrist spin seems to be the norm of the day globally when it comes to white ball cricket and Sandakan will certainly be in discussion of authorities. He needs to work on his fielding though as it remains well below par.