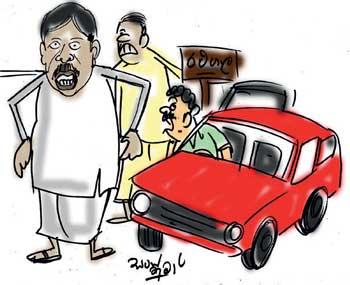 A vehicle park built at a township not far from the main city at a cost of Rs. 6.5 million several months ago is being kept unopened despite the heavy traffic congestion on the road-stretch where it is chock-a-block at all times of the day.

This park is reportedly being looked on as their private property by several local politicos who would tongue-lash in choice Sinhala anyone found to have parked their vehicle here.

The owners of vehicles who are visiting the town in increasing numbers in the current festive season have to undergo much inconvenience due to the unavailability of adequate parking space when there is a vehicle park already available for use, they say.

The opening of the vehicle park is being deliberately delayed for continuing to collect kickbacks from the owners of unauthorized trade stalls erected on the park, they say.