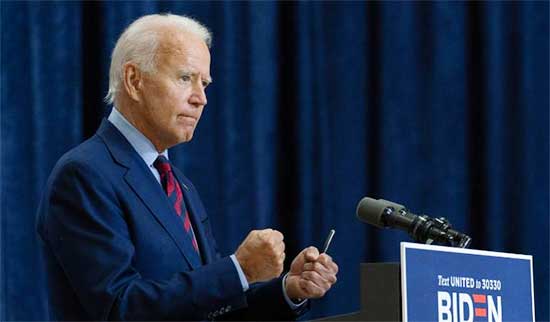 In 1961, shortly after his election victory, President-elect John F Kennedy quoted one of the first colonists of the US, John Winthrop who, in the year 1630, said, “We must always consider that we shall be as a city upon a hill—the eyes of all people are upon us”. This was one of the first examples of the belief that America would be exceptional, and that it would become a country that would set standards for the world to follow. The significance of the United States throughout the world and the protracted vote count and the roller coaster nature of the recently concluded presidential election ensured that it was keenly watched throughout the world.

When President Donald Trump contracted coronavirus, it seemed he had been dealt a knockout blow by the forces of nature that he showed little regard for. But demonstrating an astonishing resolve and will-power, and utilizing the power of chauvinism, bigotry and fear he stormed back into the presidential election contest, defied predictions to rally those millions that backed him, and almost made it in the end. In one state the difference in votes is wafer thin, which has generated an automatic recount. However, the president’s inability to come up with solid evidence of irregularities that would make a difference to the result has led the courts to decline to act on his protests. He has not displayed the graciousness displayed by former losers in previous presidential polls in accepting the verdict of the majority of voters.

In President-elect Joe Biden’s victory at the 2020 presidential elections, overcoming the politics of racism and chauvinism which many other democratic countries worldwide are succumbing to, the US has reaffirmed the value of democratic values through education and the strength of its democratic institutions. The election was closely contested to the end. At the beginning when the regular votes cast at the polling stations were being counted, President Donald Trump ran up a lead which contradicted the pollsters as his election victory in 2016 had done. When this lead dissipated with the counting of mail-in ballots, the president found fault with the electoral process. But the courts of law in various states rejected his call to stop the vote count.

Although holding the most powerful position in the most powerful country in the world there were two key factors that finally ensured that the majority of voters with more enlightened views prevailed rather than the US president and his supporters despite early declaration that he was the winner and insistence by him and his advisors that there was voter fraud. The first was the strength and independence of its institutions. The second was the layered nature of US democracy with power being shared at different levels of government. This meant that issues were resolved speedily at the level at which they arose without needing to go to higher levels where power is more concentrated and presidential power might have prevailed. This is also the contrast between the US system and its system of independent institutions and multi-layered democracy and the direction in which Sri Lanka is heading following the passage of the 20th Amendment.

In Sri Lanka, unlike in the US, the centralized nature of the polity, which the 20th Amendment has exacerbated, will ensure that the president’s decisions can go right down the line to the lowest level. The failure to institute the Province Councils as envisaged, and to strengthen them adequately, also prevents a multilayered approach in our country. Sri Lanka has opted for a system where the president will select the heads of all national level institutions. The president has strengthened this top-down system of decision making by bringing in the military to implement coronavirus containment strategies and also by deploying retired military personnel within the government administration. This centralization of power is being justified on account of the need to resolve the many crises that beset the country. Sri Lanka’s historical experience is that imposing a top-down strategy of governance without adequately assessing the needs of communities at local levels would lead to frustrations and negative consequences.

Among the crises that Sri Lanka has to cope with are getting the economy restarted after the Easter bombing and Covid catastrophes, providing productive employment to all those who have lost their jobs, and generating sufficient revenues to repay the foreign debts that have fallen due. It is unfortunate that the government has not included the opposition parties in its deliberations on these matters. Both the SJB and JVP have offered to support the government in addressing these problems. Speaking in parliament about dealing with the community spread of the coronavirus, a respected university academic, Dr Harini Amarasuriya of the JVP said, “This is not a task that could be achieved by a single party…The leadership should be mature enough to make preparations and plans and to manage them. This is not an issue that should be used to score political points.”

One of the reasons why President Trump could not win the election was his unwillingness to hear the voices emanating from the opposition political entities and the scientific communities including WHO, which could have reduced the high levels of fatalities in one of the richest and most developed countries in the world.

Likewise, the cost will be very high if Sri Lanka does not take the best path right from the outset. The most pressing would be to contain the spread of the coronavirus into the community. The role of community-based organisations and groups becomes important when it concerns preventing or limiting community spread. Decisions taken at the top need to be conveyed to the community level to elicit cooperation of the community.

In divided societies it is important to have consensual decision making to the extent that is possible. This can be through the setting up of forums for dialogue and discussion that bring inclusivity into government as often stated by Justice Minister Ali Sabry but is not yet manifested in the country’s political and administrative life. The greater the participation that people have in the decisions that are made, the more likely they are to understand and cooperate with them which differs from a military compliance or demand to obey instructions.

The manner in which the incoming Biden administration deals with the deep divisions in US society in the immediate post-Trump period may offer lessons to Sri Lanka as it grapples with its own internal divisions. Especially during the period of President Trump, US society began to polarize not only on the long standing basis of race and colour, but also on the basis of political ideology. These fissures will continue into the future and President-elect Biden and his team will need to address them. The situation is not unlike that which took place in Sri Lanka in 2015. A rainbow coalition which included breakaway factions of the Republican Party combined forces to defeat President Trump. In Sri Lanka, a similar coalition was unable to cohabit successfully other than for a relatively short time after it came to power, and thus lost an opportunity to provide an example to the world.

It is likely that the new Biden administration would adopt a middle of the road and pragmatic approach to policies within the country. They would be mindful that some of the liberal policies of the Obama era, in regard to issues such as climate change, gender justice and immigration, are red flags to those millions who voted for President Trump and passionately support his conservative view of the world. The need to address the divisions within the United States, and deal with the needs of those who feel marginalized and disrespected on all sides, would need to be prioritized. One of the clarion calls of ‘”Black Lives Matter” of the opposition to Trump campaign should ideally be converted by the Biden administration to “All Lives Matter’ not only within the US but at international levels as well.

The issue of the UN Human Rights Council and the US role in it vis-a-vis Sri Lanka would be a sensitive one to the government. There is a likelihood that the US will rejoin the UNHRC which it left with President Trump denouncing it as a “cesspool of political bias”, and other international institutions such as the Paris Agreement on climate change, in the aftermath of the change of administration. In March of this year, the government announced that it was withdrawing from the co-sponsorship of UNHRC Resolution No 30/1 of 2015 that was backed by the US and which its predecessor signed. The former government committed itself to a process of transitional justice and reconciliation which included setting up institutions that dealt with past violations of human rights and remedies for them. At the time of withdrawal from those commitments the present government also committed itself to developing a nationally driven reconciliation process. By starting to implement it, the government can speed up the healing process all round.

During the recent visit to Sri Lanka of US Secretary of State Mike Pompeo, the government’s official position spelt out by Foreign Minister Dinesh Gunawardena was to be “As a sovereign, free, independent nation, Sri Lanka’s foreign policy will remain neutral, non-aligned, and friendly. Conscious of the opportunities and responsibilities that come with our strategic location, we see the importance of maintaining the freedom of navigation in our seas and airspace, also protecting sea lines of communication and the undersea cables. We believe all countries should adhere to and respect international law, including the UN Convention on the Law of the Sea.” Healing the relationship with the US and the international community with regard to UNHRC resolution 30/1, and healing the wounds that are internal, would be more constructive than to rely on other international powers and get deeper into geopolitical quagmires that are beyond our depth.