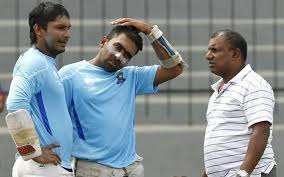 Cricketers alleged to have fixed the 2011 World Cup final are calling for State prosecutors to expedite the case saying there is no basis for claims made by ruling party politician Mahindananda Aluthgamage.

They also want the Minister to be tried in court for making false allegations, using legal provisions enacted last year. Aluthgamage, a former Sports Minister now holding the agriculture portfolio, dropped a bombshell in June claiming Sri Lanka “sold” the 2011 World Cup final to India. He renewed his allegation on a live talk-show this week.

While police ‘dropped’ the case over lack of evidence and the International Cricket Council’s (ICC) Anti-Corruption Unit (ACU) found no evidence to merit an investigation, the Attorney General’s Department is yet to give its opinion on whether or not to continue the case or close it.

The work of prosecutors has been hampered by lack of evidence. Although the cricketers accused of allegedly fixing the match have submitted proof of team approvals, the AG’s Department is trying to establish the authenticity of those documents as the papers are not at the Ministry.

The Ministry has confirmed to the AG’s Department that it has no records of team approval or a letter sent by the Minister to the ICC, sources said. This was after the AG requested the Ministry to check all its references to see whether it had copies of team approval granted to the original 15-man squad and to the subsequent injury replacements.

The Selectors in consultation with the team management made two changes to the side bringing in Chaminda Vaas and spinner Suraj Randiv as possible replacements for Angelo Mathews and ace spinner Muttiah Muralidaran.

Though no team or individual can represent Sri Lanka without the Ministry approval, the Minister now claims he did not sanction the injury replacement. There was, however, documentary evidence to show he was not being truthful when he claimed neither the Sports Ministry, which he headed at the time, nor Sri Lanka Cricket (SLC) were aware of last-minute additions to the World Cup squad.

The Sunday Times exclusively reported with documents on June 28, 2020, to show the Ministry had sanctioned injury replacements on March 30, 2011. This dealt a blow to the credibility of the Minister’s allegations.

The AG has now directed the Special Investigation Unit (SIU) to record a statement from Anura Jayawickrema who was the Secretary to the Ministry of Sports.

On Monday, Minister Aluthgamage during a talk show showed several documents claiming to substantiate his assertions of a fix. The proof, he said, was submitted to local investigators and also the ICU’s ACU. He repeated claims that he lodged an official complaint with the ICC at the time. Dated October 30, 2011, it had requested a formal inquiry and was addressed to Haroon Lorgat, the then Chief Executive of the ICC, he said.

But the ICC has denied receiving such a letter. “There is no record of any letter regarding this matter sent by the then Sri Lanka Sports Minister to the ICC and senior ICC staff at the time have confirmed they have no recollection of receiving any such letter which would have led to an investigation,” Alex Marshall, Head of ICC ACU, said in a statement.

If the Minister did lodge an official complaint with the ICC by forwarding a document to investigators, there has to be a record of it as all official correspondence is preserved at the Ministry. Surprisingly no records are available at the ministry.

The AG’s Department, however, is looking to establish whether the Minister did indeed make a written complaint to the ICC; or whether he manufactured evidence to support his claims in order to avoid a possible jail term for making false allegations under Section 13 of the Prevention of Offences Relating to Sports Act. The letter the Minister said he had sent was seen by the Sunday Times and does not even contain a reference number.

The players and the Selectors who have written to the AG’s department this week through their lawyers have asked the prosecutors to hold Aluthgamage accountable for making false and baseless allegations to substantiate his claims.

According to the section 13 of the Prevention of Offences Relating to Sports Act No. 19 of 2019, making false allegations is an offence and warrants a fine and a jail term if proved in a court of law.

Following the June 18 claims, cricketers Aravinda de Silva (Selection Committee Chairman), Upul Tharanga and Kumar Sangakkara were questioned at length by the SIU. Mahela Jayawardene was also asked to be present but was told to keep off at the last minute, hours before police announced they had stopped the investigation due to insufficient evidence against the players.