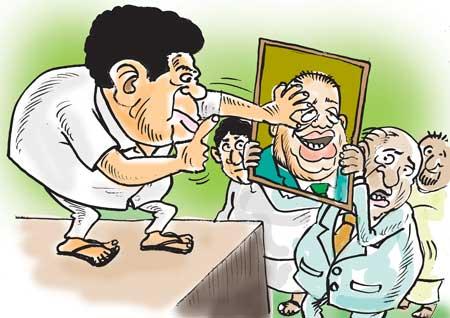 The Sajith faction that fell far short of their expectations at the general polls has decided to embark on a new programme in a bid to brighten their political prospects. Now they are looking for a group of activists who could be relied on to work with dedication in pursuit of the goals of the programme.

The SJB high-ups also discussed the need of a dynamic character who could give leadership to the proposed programme and they considered the names of some prominent anti-Pohottuwa individuals and finally they had to agree that none of them was match for BR of Pohottuwa.

While they were pursuing the subject, one of them said that he could think of the person most appropriate for the job!

They all turned their attention to their colleague expecting him to come up with the name.

“The ideal person is Mangie!” he said.

They all looked at one another with a surprised look tinged with amusement.

The high–up who proposed the name equally surprised by the reaction of the colleagues asked them: “Why? What’s wrong with him?”

Then a top person of the party spoke up: “Are you mad…? Can’t you understand that we must first win over the majority community…?”