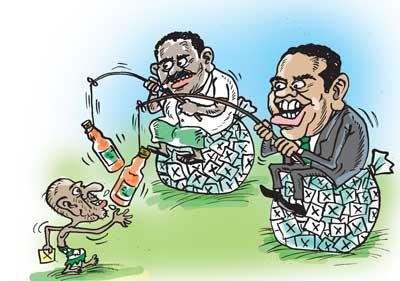 A prominent government politico from Wayamba has begun distributing blue, red and yellow cards among his close supporters, they say.

A former Diyawanna politico from an upcountry district too had already been distributing some special ‘chits’ among the constituents.

Both ‘cards’ and ‘chits’ are really tokens which carry a certain value!

When these ‘cards’ and ‘chits’ are produced at an appointed spot, those producing them would get a full bottle or a half a bottle or a quarter bottle depending on the value indicated on the ‘card’ or the ‘chit’.

According to our information, as for the tokens distributed by the Wayamba politico, the blue card would get a full bottle, the red card half a bottle and the yellow card a quarter bottle.

These tokens are said to be a very effective bait for mustering the preference vote.  Providing alcohol through this token system, they say, is a very costly exercise. However, the hefty cost sits lightly on the politicos concerned as they own the companies that run the distilleries.

Meanwhile, some politicos who cannot afford to treat the voters with the alcoholic beverage, have begun distributing bottles containing non-alcoholic beverages. These bottles carry a label displaying the name and the preference number of the politico. It is a relatively cheap bait, they say.