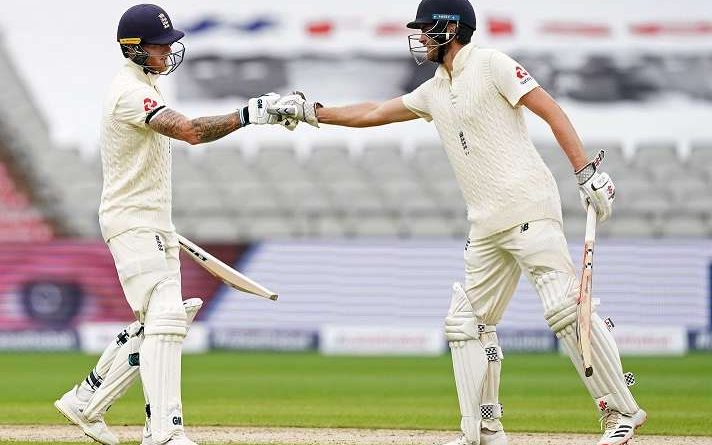 Stokes (L) is congratulated by England’s Dom Sibley (R) after reaching 50 on the first day of the second Test cricket match between England and the West Indies at Old Trafford in Manchester, northwest England on July 16, 2020   Dom Sibley and Ben Stokes ground out patient half-centuries as England battled to 207 for three at the close on day one of the second test against the West Indies at Old Trafford on Thursday. England were wobbling on 81 for three before Sibley and Stokes shared an unbeaten 126-run stand to give the hosts the upper hand on a day when only 82 overs were bowled after rain delayed the start. Opener Sibley remained unbeaten on 86 while Stokes also took his time to get settled on a damp pitch before reaching 59 not out at stumps.   “Dom concentrates very well. He’s willing to bat for long periods of time and that’s what we needed at the top,” England coach Chris Silverwood told Sky Sports. “Those partnerships have put us in a great position. We’ve got to back it up tomorrow.” West Indies had won the toss and chosen to bowl to take advantage of seam-friendly conditions but it was off-spinner Roston Chase who dismissed opener Rory Burns and Zak Crawley.   Chase trapped Burns lbw for 15 at the stroke of lunch before Crawley flicked the first ball of the second session straight to Windies captain Jason Holder at leg-slip. England skipper Joe Root, who missed the first test to attend the birth of his child, stitched together a 52-run partnership with Sibley to stabilise the innings before edging an Alzarri Joseph outswinger to Holder at slip to depart for 23.   Sibley was handed two lifelines, dropped at short-leg to deny Chase a third wicket and again on 68 when a thick outside edge off Shannon Gabriel flew to second slip where Holder dropped the catch.   England are without Jofra Archer after the fast bowler breached the team’s bio-secure protocols while Mark Wood and James Anderson were rested. Pace bowlers Stuart Broad, Sam Curran and Chris Woakes were named in the side.   West Indies, who won the first test in Southampton by four wickets to take a 1-0 lead in the three-match series, named an unchanged team. The series is being played in a bio-secure bubble without spectators in attendance due to the COVID-19 pandemic.  Brief scores: England 207/3 (Dom Sibley 86*, Ben Stokes 59*; Roston Chase 2-53) vs West Indies