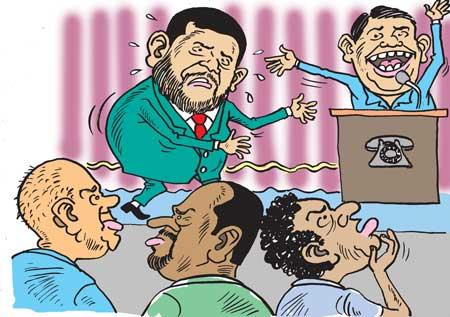 The inauguration of the new alliance, the Samagi Jana Balawegaya (SJB) led by Sajith was held at Nelum Pokuna the other day.

ll Opposition party leaders invited to join the alliance turned up at the ceremony. They all took their seats after being given a rousing welcome. The Green party seniors holding top positions in the party were conspicuous by their absence. However, a large number of party members and supporters was present on the occasion.

Later, all party leaders, one by one, were called to the stage to sign the important document. It was the Jathika Hela Urumaya leader Ranawaka who was invited first to do the honours. There was a rousing ovation from the audience when his name was announced.

The next turn was SLMC leader Hakeem’s. He too got a similar huge ovation from the crowd present. Thereafter, Mano and several other party leaders too received loud applause when their names were announced.

However, when a certain party leader was invited, there were no loud cheers to greet him! What followed was a deafening silence, they say.  The party leader is said to be highly upset over the cold reception he got from the audience at this ceremony.