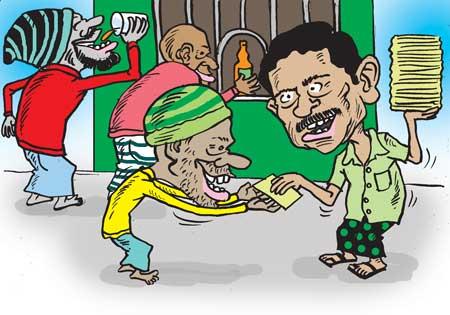 As the election fever heightens, Manapa Pore, the scramble for the preference vote too has reached a new high, they say.

All prospective candidates, even those whose chances of winning are very slim, are reportedly resorting to all tricks in the bag to woo the manape. Most candidates are said to be giving various kinds of gifts to the people in their respective areas.

By the way, there is a politico in a district with a cool climate, who has found a novel way of winning the hearts and minds of his voters. He won a Diyawanna seat in this district at the last polls by being quite liberal with his purse. He has planned to win over voters in a different way this time.

The politico owns several wine shops in the district. He has distributed ‘coupons’ to a selected number of constituents which entitle them to a free ‘shot’ at a given spot. Some of these coupons entitle the bearer to enjoy the free ‘shot’ on several occasions,
they say.

The politico hopes to win the Diyawanna seat again at the April polls by offering the ‘warming-up’ drink to his voters.