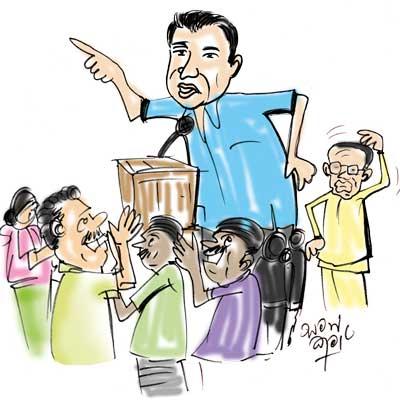 The raging rivalry between two politicos – a veteran and a young man – in an area of ancient kingdom fame has become a typical replay of the well-known Guttila – Musila Jataka story in Buddhist literature, say the people in the area. In the Jataka story, Guttila, the royal musician, a master lute player is compelled to enter a lute-playing competition with his own favourite pupil Musila to demonstrate his peerless prowess in the art.

Now that general polls are round the corner, ‘Musila’ is said to be going around the district holding pocket meetings to woo votes where he would invariably take his political mentor to the task.

He would say: “… What has he done for the people…! He should remain at home enjoying his pension…It’s a pity that he has taken to politics again! He has no shame!”

‘Guttila Gurunnanse’ too is already on the campaign trail addressing meetings across the district. However, he would utter no word about his pupil ‘Musila’ in his speeches, they say.