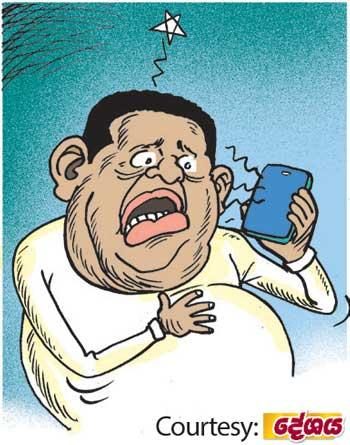 Diyawanna politico Arun from the Puttalam district was attending a Pohottuwa meeting when his security guard received a call on the mobile phone. The caller said that he was speaking from such and such a ‘mansion’ and he wanted to contact the mantrithuma.  The security guard lost no time in handing the mobile phone to the Diyawanna member.

Arun thought that the call was from the former strongman and he could only say, “Sir…,” for the caller broke into a vitriolic harangue. “Aise, I understand that you have made it a practice to berate me referring to me as ‘aru’ and ‘moo’…” Arun immediately recognized the voice of the caller. He had protested: “Who told you this lie, Sir? This is an utter falsehood!”
However, the caller’s outburst had continued with unabated intensity. “Are you people trying to sideline me… Your plans will fizzle out…!”
Arun thereafter quietly listened until the person at the other end of the line called off after venting his spleen for several minutes.
It was a highly flabbergasted Arun who had walked back to the meeting to follow the proceedings, they say.