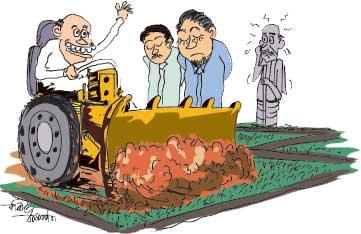 A vast tract of paddy land in a certain village is being filled for a commercial purpose under the direction of a prominent politico, they say.

The authorities responsible for promoting paddy cultivation are reportedly turning a blind eye to this illegal filling operation despite being aware that a powerful politico is behind it, due to either fear or connivance.

The paddies being filled come under the purview of three Grama Niladhari Divisions.

Peasants in the area say that if any of them filled a few square feet of paddyland for an important purpose, the authorities would quickly enforce the law, but they are looking the other way when a large tract is being unlawfully filled by a person wielding political clout.