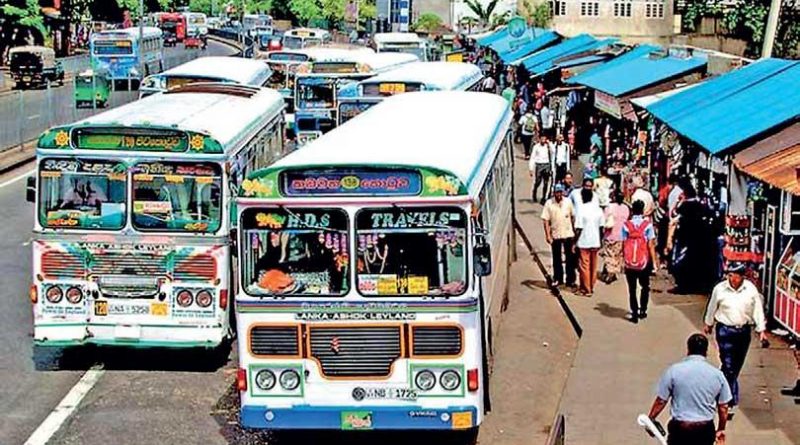 Private bus drivers often get cursed by people for their haphazard ways of doing things such as excessive speeding, being negligent of road signs and violating traffic laws. Gemunu Wijeratne, much associated with the private buses, making a serious remark, said 50% of bus drivers and conductors islandwide were addicted to drugs. This issue is yet again another blow to the bus industry.
However, it is vital to probe this matter and to see whether there is any truth in it. Taking the remark into consideration, we spoke to the Minister of Transport Arjuna Ranatunga, Wijeratne and some of the conductors, drivers and commuters.

While claiming that 50% of bus drivers and conductors island-wide were addicted to drugs, he affirmed that the fault did not lie with the drivers or conductors, but with the system.
“The system in the sense, not having proper parking areas, proper timetables and mental stress due to heavy traffic situations have contributed to them getting addicted to drugs,” Wijeratne said.

He said that bus drivers and conductors used to be addicted to ganja, but now the trend has moved towards crystal methamphetamine which is known as ‘ice.’
“Conductors and drivers used to earn extra money without giving proper balance cash to passengers, with many conductors collecting a considerable amount at the end of the day, which they used to get drugs such as ice,” he said.
“This situation has triggered a collapse in the bus industry”, he added.
When asked as to how this was known to him, Wijeratne said that the complaints had been coming from the owners of their private buses. He added that the majority of the complaints had come from the Colombo and suburban areas.
Letters in this regard were sent to the Transport Minister, the National Council on Road Safety and to the Police Headquarters Wijeratne added.

Conductors and drivers are alleged to be raising money without giving proper balance to passengers; which they use to get drugs such as ice

Any driver found guilty of driving under the influence of narcotics, through medical tests, would have his driving licence cancelled, Transport and Civil Aviation Minister Arjuna Ranatunga said.
He made these comments while speaking at a mobile health clinic organised by the National Road Safety Council to improve on the health of private bus drivers and conductors. The clinic was held at Bastian Mawatha Private Bus Stand on September 18
“All drivers and conductors will be subjected to medical tests before the year concludes. There are media reports that some private bus crews were operating their buses while under the influence of drugs such as ‘ice’. This is a dangerous situation and we should take immediate action to prevent it,” he said.

This is a dangerous situation

Therefore, we will take steps to cancel the licence of any driver if medical tests find him to be guilty of driving under the influence of narcotics. The Flying Squad would be deployed round the clock to check private bus crews for use of drugs while on duty. There is a test called Split Specimen Test to detect if the operating crews have consumed drugs, the Minister said.
“None of the previous Governments gave due recognition to the private bus industry and nothing has been done for the betterment of the industry. But we will take all possible steps to protect this industry by solving its long-term problems.
Most of the private bus drivers have not been subjected to medical tests for a long time because either they don’t have money or they are not bothered about it,” he said.

It was not fair to reprimand the drivers and conductors

While saying that they had not received too many complaints with regard to the drugs being used by drivers and conductors, National Transport Commission (NTC) Chairman Janaka Mallimarachchi told the Dailymirror that he would challenge Wijeratne to prove these accusations providing clear cut evidence.

“It was not fair to reprimand the drivers and conductors for using drugs. That’s why I invite Mr. Wijeratne to show the occasions where it can be proved that such an activity, was taking place in reality.

When the  Dailymirror spoke with some passengers and bus drivers, Nayana Peries from Thimbirigasyaya said that if it was actually happening, it is a serious situation and added the Transport ministry must monitor this and take necessary action.
Somalatha from Borella said that she was not of the opinion that the bus drivers could not afford to drive big vehicles like buses under influence of drugs. However, she added that the authorities should probe this.
C.H Siriwardane from Avissawella said that it was unbelievable that the drivers and the conductors were addicted to drugs; risking hundreds of people in the process.
“The attention of the authority should be drawn immediately due to the fact that the trend comes at the cost of people’s lives,” Siriwardane said.
A bus conductor of a 138 (Homagama – Pettah), who remained anonymous said that it was true that some drivers and conductors had been addicted to drugs like ice and added it had become a menace to the bus industry.
A bus driver of 04 (Chilaw – Colombo), who also remained anonymous, said that it was a known fact that some conductors were badly addicted to drugs like ganja. He added that not much is reported on drivers being addicted to drugs.
“We have not gone to that extent that we only ‘chew’ betel. It is extremely risky and hard to drive after consuming alcohol or consuming drugs, he said.
“This has been reported mainly from the buses operating in the Colombo area.
In conclusion, it is fitting to note that according to the research we carried out based on the statement made by Wijeratne, it can be said that there is some truth behind this. Moreover, the purpose of this article is to make the authorities be aware of a circumstance if this trend for drugs and act accordingly. Hence, it is up to the relevant regulatory bodies to look into the matter and take necessary actions to curb this menace.