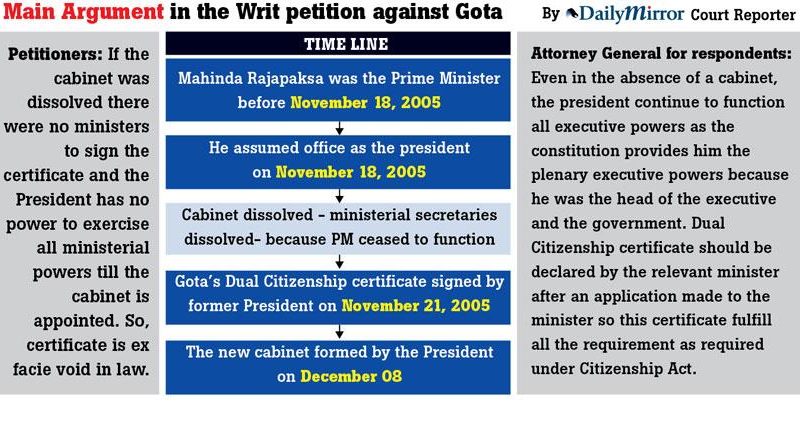 Appearing for the Attorney General, Senior Deputy Solicitor General Nerin Pulle today told that the former president, who had signed the dual citizenship certificate of Gotabaya Rajapaksa in 2005, actually had the power to do so as the relevant minister, because he had continued to exercise being the head of the government and the executive even in absence of a cabinet at that time.

Subsequently, he had to obtain a dual citizenship status by applying to the relevant Ministry, in order to obtain a new Passport and a National Identity Card, because he was no longer a citizen of Sri Lanka at that time.

Mr. Fernando stated that, thereafter, Gotabaya Rajapaksa had possibly applied for a dual citizenship certificate to the relevant Ministry during the time period November 18 – 24, 2005, soon after his brother, Mahinda Rajapaksa was elected as the President of Sri Lanka.

Upon Mahinda Rajapaksa assuming office as President soon after the election on November 18, 2005, the Cabinet of Ministers stood dissolved. According to Mr. Fernando, the new Prime Minister, Ministers and assigning of the subjects to the Ministries took place, on November 21, 23 and December 08 respectively.

So he stressed that there was no cabinet and therefore no Ministers or secretaries were functioning when Gotabhaya Rajapaksa’s dual citizenship certificate was issued.

He said that the impugned dual citizenship certificate had been signed for the relevant ministerial secretary by the then President and thus such secretary cannot function by the operation of law under the constitution.

Court of Appeal President Yasantha Kodagoda brought a question at this moment on the fact that whether there was any residual power vested upon president to exercise the executive arm of the government in the absence of the cabinet.

Counsel Fernando replied that the 1978 constitution is a combination of both Westminster and presidential systems of governance and that it’s intention was not to provide such powers to execute by one person. And he also stressed on the fact that there was a difference between the President’s executive power as a whole and the executive powers vested upon ministers and their secretaries.

Therefore he said that the former President could not have exercised such powers in the absence of a cabinet.

Consequently, he requested to grant interim reliefs as the impugned dual citizenship certificate, on the face of it (ex facie) void and is nullity in law.

On that background SDSG Nerin Pulle said that a dual citizenship certificate did not need the signature of a secretary but only the authorization of the relevant minister.

He said, in this impugned certificate the former President had signed it as a minister which he could do according to certain constitutional provisions.

He disputed the petitioner’s stance and said that 1978 constitution is not a hybrid system but a presidential form of governance based constitution. The president is the head of the executive elected by the people according to the constitution thereby he possesses a plenary executive power.

SDSG also referring to the Article 44(2) of the Constitution which was in existence in 2005 ( this article was amended after 19 amendment) said that the President could continue to function all the executive powers as the head of the government and the executive, until the new cabinet is appointed. ‘So in this case, the president had signed the certificate as per citizenship Act in the ministerial capacity and therefore the requirements to obtain dual citizenship certificate had been fulfilled as per law”, he said.

He also stated that the reliefs sought in the petition is dealt with the statutory powers confered to the respondents and there for seeking writ of prohibition on his respondents is questionable.

Meanwhile, During his submission, the SDSG also made a comment that, the original docket pertaining to Gotabaya Rajapaksa’s dual citizenship issue is not in possession at the moment to produce before the court.

Article 44(2) of the Constitution which was in existence in 2005 said that the President could continue to function all the executive powers as the head of the government and the executive, until the new cabinet is appointed. So in this case, President had signed the certificate as per citizenship Act in the ministerial capacity and therefore the requirements to obtain dual citizenship certificate had been fulfilled as per law.

Objection over maintainability of writ petition

Romesh de Silva PC appearing for Gotabaya Rajapaksa in the writ petition today brought up a preliminary objection over the maintainability of the writ application on several grounds.

He said the petition cannot seek the relief sought in the petition as they do not have the locus standi (right to bring the action) in the first place.

Mr. De Silva said that the subject matter relating to the petition is identical to investigation which is still in progress at the Chief Magistrate’s Court and therefore, without such investigation being come to a conclusion the petitioners cannot invoke writ jurisdiction and seek reliefs.

He was of the view that the petition has been filed mala fide by politically motivated intentions as there was unexplained delay in filing the case after a long time since 2005.

Gamini Marapana PC who appeared for former President Mahinda Rajapaksa also said that the petitioners should have waited till the investigation is concluded on this matter at the magistrate’s court. “If the investigation finds that there is no wrongdoing, then what would happen? Only the people’s right to vote what they want may be deprived from this” he said.

The three Judges Bench comprising, Justices Yasantha Kodagoda (President/CA), Arjuna Obeysekara and Mahinda Samayawardena however, decided to consider the petitioners’ stance and the preliminary objections both together heard the petitioners’ and Attorney General’s stance today.

Other respondents address the court from 1.30 p.m. today over the writ application which was filed disputing the citizenship status of Gotabaya Rajapaksa.