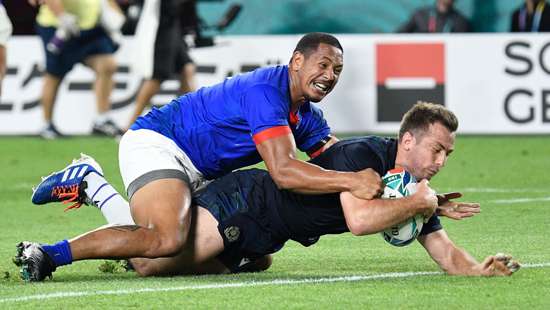 Scotland revived their Rugby World Cup campaign with a 34-0 victory over Samoa today (30), scoring four tries in a much-improved performance to secure a bonus point that could prove crucial in a tight Pool ‘A’.

Japan’s stunning upset of Ireland on Saturday shattered the expected permutations of the pool and the Scots knew they needed to get a big win on the board after their dismal defeat to the Irish in their opener.

Winger Sean Maitland and scrum half Greig Laidlaw scored converted tries with Stuart Hogg landing a 40 metre drop goal in the first half while two penalty tries after the break secured the all-important extra point.

Samoa winger Ed Fidow was the offender for both penalty tries and he was shown a yellow card for the first then given his marching orders after crashing into Maitland with his knees to stop the Scot getting over the line in the 74th minute.