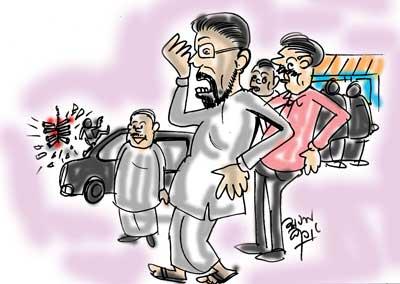 A public reception to a VIP vying for a top office in the country had been organized on a grand scale in the Kandy area recently.

Firecrackers worth Rs. 300,000 had been donated by a well-wisher to be set off to welcome the aspirant to high office on his arrival for the reception.
The organizers had assigned a separate person for the job of lighting the firecrackers, as their chief guest expected to arrive in a motorcade, alighted from his vehicle.
A motorcade had drawn up at the venue just when their guest was expected to turn up and the man in charge of firecrackers had gone into action.
Staccato bursts of firecrackers had rent the air. But it was a politico from Ratnapura area, who had come in the motorcade and he was seen heading for the meeting with a wide grin on his face.
The chief guest had arrived about 20 minutes later, and by that time there had not been a single firecracker left behind to light to welcome him!