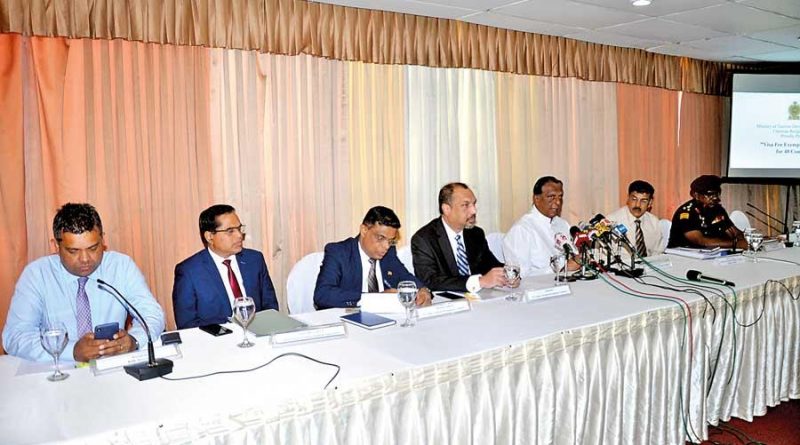 Tourism Development, Wildlife and Christian Religious Affairs Minister John Amaratunga plans to meet the Russian ambassador to Sri Lanka in an attempt to lift the travel advisory issued by the Russian Federation on visiting Sri Lanka, in the aftermath of the Easter bombings.
Amaratunga emphasised that the travel advisory stands irrelevant as of now as Sri Lanka has even lifted the Emergency Law on the assurance given by the security forces on the security situation of the country.
“Despite the travel advisory, Russian travellers keep visiting Sri Lanka,” Amaratunga told reporters in Colombo.
According to Sri Lanka Tourism Development Authority (SLTDA) statistics, Russia is among the handful of tourism source markets of Sri Lanka, which has shown a positive growth this year.
Tourist arrivals from Russia have increased 16.4 percent year-on-year (YoY) to 45,722 up to July, this year.

Russian tourist arrivals in July also recorded a YoY growth of 11.9 percent.
Sri Lanka’s tourism authorities expect the total tourist arrivals to recover to the 2-2.1 million range by the end of this year.
SLTDA Chairman Johanne Jayaratne estimated that this month’s tourist arrivals would reach 160,000-170,0000, backed up the Global Bohra Convention, which is to be held in Colombo early next month.  As of August 26, over 112,000 tourists have arrived in Sri Lanka during the month, led by visitors from India, the United Kingdom and China.
Jayaratne expects tourist arrivals to see a significant boost as participants of the Bohra Convention are starting to arrive in Sri Lanka. Despite the faster recovery in terms of arrivals, he noted that recovery in revenue would take a longer time, partly due to discounts. The government has granted a number of concessions to airlines, hotels and tour operators to offer special discounted promotional packages to tourists.  SriLankan Airlines stated that the national carrier is offering 10-15 percent discounted air tickets to India and China by utilising the concessions.
According to Board of Airline Representatives Chairman Dimuthu Tennakoon, SriLankan Airlines flights to India and China are operating at full capacity as many students are travelling to Sri Lanka during the summer break, taking advantage of the promotional packages.  In particular, he said that the air traffic to India has seen a significant demand with the launch of the special promotional packages.
“We had to provide additional capacities to flights from India but our flights are still full,” he said.
Further, Tennakoon noted that several Chinese carriers including Air China, Chine Eastern and China Southern are scheduled to resume their flights from October, this year.

The Sri Lanka Tourism Development Authority (SLTDA) yesterday stressed that the tourists who are eligible under the free visa facility still need to obtain visa when visiting Sri Lanka.
The government exempted travellers from 48 countries from the mandatory visa fee payment when obtaining a visa to visit Sri Lanka for the next six months, starting from August.
Immigration and Emigration Department Controller General Pasan Ratnayake said that some tourists visit Sri Lanka without applying for visa on the misunderstanding that they don’t have to obtain visa to visit Sri Lanka.

The Cabinet of Ministers this week granted the approval to call tenders for an advertising campaign on an international television channel, which will be the first major promotion since the Easter Sunday attacks.
The Cabinet proposal was presented by Tourism Development, Wildlife and Christian Religious Affairs Minister John Amaratunga.
Sri Lanka Tourism Promotion Bureau (SLTPB) Chairman Kishu Gomes told Mirror Business that based on the Cabinet approval the SLTPB would call for tenders to select a TV channel for the campaign, which would be completed in two months.

However, Amaratunga told Mirror Business that the campaign is likely to run on CNN for a period of three months.
Following the communal upheaval in Kandy last year, the government launched a similar US advertising campaign on CNN, at a budget of US $ 650,000.
Gomes noted that the proposed campaign will mainly look at promoting Sri Lanka as a major tourist destination and its key tourism products. According to sources, the budget for the campaign is set between Rs.100-150 million.