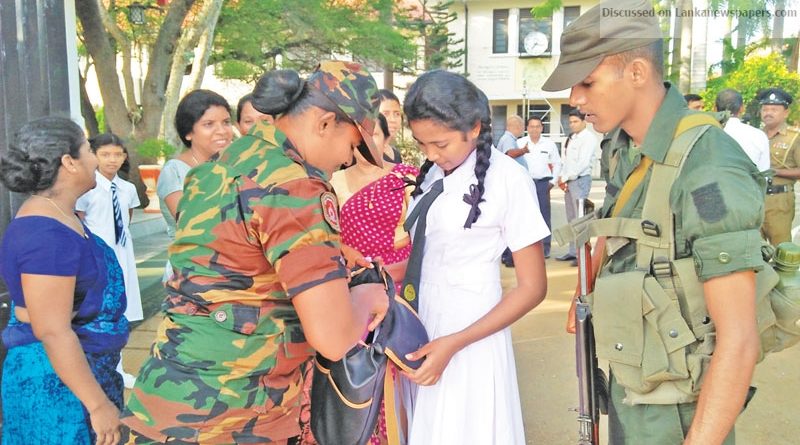 Headlines
May 7, 2019 Lankanewspapers 0 Comments
The second school term started yesterday with a low student turnout recorded at a number of schools.
Only classes from year 06 – 13 started yesterday amidst tight security following the Easter Sunday bombings.
While the attendance of students in most schools in major cities was very low, students attendance in some rural areas was relatively high.
Extensive security measures by the Police and Security Forces were in place with a majority of school authorities expressing their satisfaction over the measures to secure schools. Speaking to the Daily News, Principal of Royal College B. A. Abeyrathna said that the student attendance of the school was only 309.
“We have done our level best to ensure the security of our students. Checking of the school bags and other similar measures are all undertaken by the OBA, the parents and the students.” Abeyrathna said.
According to Ananda College Principal S.M.Keerthirathna, the student turn-out was only 50 out of nearly 6500 students in the school. “There are 1,260 students in the Primary Section, and the rest of the students are supposed to attend. The school has taken all necessary security measures in our capacity, and most of these measures we have been doing even during the time there was no any security threat. I assume that parents do not feel safe enough to send their children to schools yet,” Keerthirathna pointed out.
Deputy Principal of Devi Balika Vidyalaya, Colombo S. Dematagoda told the Daily News that only 37 students attended classes yesterday. She pointed out that all the teachers reported to work yesterday. Dematagoda stated that the school has taken all security measures in its capacity to ensure the safety of the students.
School authority of Anula Vidyalaya in Nugegoda said that the student attendance of their school was 51, out of approximately 3,500 students excluding the Primary Section. Daily News regional correspondents also report that student attendance in their respective areas were low.
The attendance of Nalanda Central College, Minuwangoda, a leading college in the area, has been only four students.

According to our Galle Central Special Correspondent, of the 6,003 students in Sangamitta Girls’ College only 152 students attended school while Southlands College, recorded an attendance of 86 students out of 2,268. At Mahinda College, Galle only 150 out of 5,308 students attended school.
Kalutara Central Special Corrospondent reports that the attendance of students at many schools in the Kalutara and Panadura Educational Divisions were extremely poor yesterday. According to him, only 130 students of Wadduwa Central College, 100 students of Panadura Royal College and 50 students of Panadura Balika Vidyalaya attended classes. According to him, some parents expressed their fear of sending their children to school, eventhough the authorities have taken all the possible safety measures for the students and teachers.”
However, many school principals expressed their total satisfaction regarding the security measures provided to their schools with the cooperation of the relevant police stations and special school committees, he further reports.
According to Pannipitiya Special Correspondent, the student attendance in the Maharagama Educational Zone was also low. Only 68 students attended Dharmapala, Pannipitiya while 58, 71 and 85 students were present at Maharagama President’s College, Kottawa Ananda Vidyalaya and Kottawa Dharmapala Vidyalaya respectively.
It is also reported that only 20% of 2000 students of Naula Sri Naga National College attended school despite tight security provided by the Police and Armed Forces.
Meanwhile, the Education Ministry in a statement said that the student attendance was “relatively lower” than usual. The statement points out that schools in urban areas recorded a low attendance while schools in rural areas reported good student attendance. “Some schools report 80% student attendance,” the statement also said.
The statement further said that the attendance of teachers in most schools was extremely good.
The Education Ministry expressed confidence that the situation will improve and the school operations will soon get back to normal. According to the statement, Education Minister Akila Viraj Kariyawasam expressed his gratitude to parents who sent their children to schools without falling trap to some politically-driven groups who spread false information on security provided to schools.