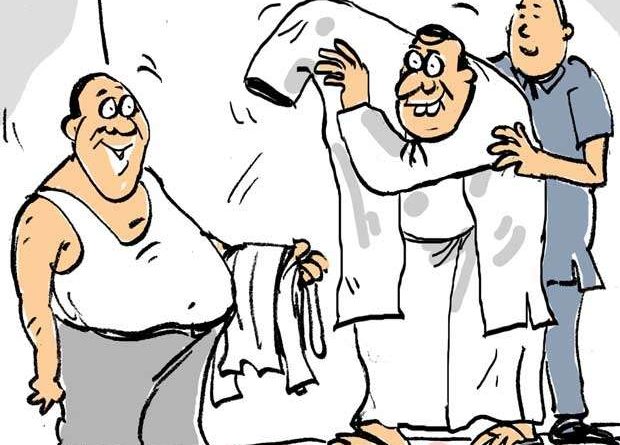 A Diyawanna politico who had received summons to call at a main office in the city quite recently had to borrow a white tunic from a colleague when he was asked to present himself to be sworn in as a purohita in the caretaker Government.
When this senior politico from the South received a message from the main office in the city asking him to call over with the least delay, he had presumed that his presence had been required for some urgent political discussion.
So, the politico had rushed to Colombo dressed in a short-sleeved shirt and a sarong.
On arrival at the main office, a colleague already present there had looked at him wide-eyed and asked: “Why are you in a short-sleeved shirt? Don’t you know that you are due to take oaths today?”
The politico reminded of the dress code to be observed had got a sudden brainwave on seeing a close friend there. He had approached him and whispering into his ear “Machang, something urgent!” had led to a nearby common bathroom.
Addressing the friend who was looking perplexed had said:
“Machang, I am in a hell of a fix! I have to present myself at the swearing-in- ceremony. I have to get there immediately properly dressed… Lend me your white tunic and put on my shirt. It’s a great favour! “
The friend had readily obliged and the politico now in the typical national dress had rushed to the hall where swearing-in- was proceeding.