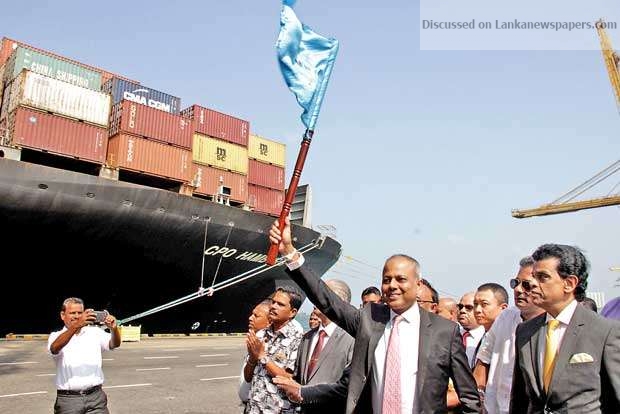 From left : Ports, Shipping and Southern Development Minister Sagala Ratnayake signals the handling of the seven millionth TEU in the presence of the Ministry Secretary and SLPA Chairman Dr. Parakrama Dissanayake and other Colombo port officials

The SLPA-owned the Jaya Container Terminal (JCT) handled 2.3 million TEUs in 2018 while the South Asia Gateway Terminal’s (SAGT) achieved of 2 million TEUs.
The Port of Colombo was ranked the top container port in terms of growth for the first time during the first half of 2018, and the port was also ranked among the top 30 container ports in the same period.
Meanwhile, Dr. Dissanayake revealed that the transshipment volumes of the Port of Colombo grew by 19.3 percent year-on-year (YoY) up to November 2018.
Ratnayake who assumed duties as the Ports, Shipping and Southern Development Minister last week, asserted that a level-playing field, which enables healthy competition, is essential to achieve Sri Lanka’s hub aspirations.
He emphasised that the Ministry is committed to create a level-playing field for all industry players.
“Everybody should have a level-playing field. It’s a tough one to be achieved, but we are working on that,” he said.
When queried on the implementation of the proposed shipping industry liberalisation by lifting the 40 percent foreign ownership restriction on shipping agencies, the minister pointed out that the responsibility of implementing that policy lies with the Finance and Mass Media Ministry.
Ratnayake noted that this year would be a challenging year in terms of policy implementation, as the country will enter into an election cycle this year.
“There are quite a few things that will be played in this year—from elections to various other things. Hence, we need to manage all in one basket,” he said.
In addition, Ratnayake announced that his ministry will start to work on an inclusive marketing policy for Sri Lanka’s entire shipping industry in the next couple of months.
The three terminal operators at the Port of Colombo—JCT, SAGT and CICT— early this year, entered into a Memorandum of Understanding (MOU) to collectively promote the Port of Colombo.
In moving forward, Dr. Dissanayake identified that the key challenge for Sri Lanka’s shipping industry is concerning the expansion of the capacity in Colombo port, which requires urgent attention.
“The first thing I see is that the need to increase capacity, not today, not tomorrow, but right now,” he stressed.
He also outlined that Sri Lanka needs to understand and act in line with the changes taking place between ports competing with the Port of Colombo as well as changes taking place within shipping lines and the shipping industry.

The Colombo International Container Terminals (CICT) has reported the handling of 2.65 million TEUs for the 12 months ending 31st December 2018, recording a 13 percent increase in annual throughput and contributing 38 percent of the Port of Colombo’s volumes in the year just concluded.
The achievement of 7 million TEUs by the Port of Colombo is a  significant factor, since CICT’s performance helped the port increase its total throughput by 14 percent in 2018, a noteworthy accomplishment in the region.
Announcing the year’s final volume, CICT said ULCCs (Ultra Large Container Carriers) of a size that only CICT is capable of handling, had contributed 70 percent to the volumes the terminal achieved for the year.  CICT handles mega container vessels from all three major shipping line alliances.

With the geographical coverage of these services and the high frequency of mainline liner service connections, CICT has helped the Port of Colombo to move up the Drewry’s Port Connectivity Index to be ranked as the 11th best connected port in the world.
“While our deep water capacity is one of the main factors driving growth, constant innovations and commitment to service excellence including facilities such as autogate, dual cycle operation, intelligent truck pooling and dispatch, a fully automated customer service kiosk, our unique mobile application and CICT e-billing have been game changers in the Port of Colombo,” CICT CEO Jack Huang said.
“The combination of state-of-the-art infrastructure and equipment, efficiency and convenience enhancing features and the synergies developed through our parent company CMPort, have enabled CICT to generate incremental volumes for Colombo, which was the primary objective of the deep water terminal,” he said.
“Additionally, the ability to access the CMPort global network enabled us to attract new transshipment volumes to the Port of Colombo.”
The concluded year has been a prolific one for CICT: besides being adjudged the Best Container Terminal in Asia in the Under 4 million TEUs at the Asian Freight, Logistics and Supply Chain (AFLAS) Awards for the second consecutive year, CICT also handled MV. Ever Golden, the first 20,000+ TEU vessel of Evergreen to call on Colombo, as well as the 14,000-TEU ‘One Columba’ – the first magenta colour vessel to call on Colombo. The company was also responsible for salvaging the storm-ravaged ‘MV Theseus’ earlier in the year.
In its engagements with the community in 2018, CICT continued to be the principal sponsor of the SLTA’s wheelchair tennis programme, was the strategic partner of the National Chamber of Exports initiative to develop local exporters, and won the softball cricket tournament organised by the Chamber of Commerce.
CICT recently also announced the addition of two new mega Quay Gantry Cranes (QGCs), six new Rubber-tyred Gantry Cranes (RTGs) and 12 Prime Movers to enable the handling of 22,000+ TEU vessels and further develop the deepwater capacity of the Port of Colombo. This enhancement is planned for completion by March 2019.
Besides its significant contributions to the growth of the Port of Colombo in volume terms, CICT is also responsible for several firsts in service innovation and eco-friendly operations. In early 2016, the company launched a US$ 10 million programme to convert its fleet of diesel operated rubber-tyred-gantry cranes to electricity driven rubber-tyred gantry cranes (E-RTGs) which have zero carbon emissions.
CICT is the first and currently the only deep water terminal in South Asia equipped with facilities to handle the largest vessels afloat. Since its inception in 2014, the terminal has incrementally grown the volume it has handled; from 686,639 TEUs in 2014, to 1,561,931 TEUs in 2015,2,002,580 TEUs in 2016, and 2,388,506 TEUs in 2017.
In its last four full years of operation, CICT has brought some of the largest vessels plying the Asia-Europe routes to Colombo. Of these, Milan Maersk (20,568 TEU), MSC Maya (19,224 TEU), Mogens Maersk (18,300 TEU), MSC New York (16,652 TEU), CMA CGM Marco Polo (16,020 TEU), Edith Maersk and EMC Thalassa Hellas (each 14,000 plus TEUs) and their sister vessels are now regular callers at CICT.