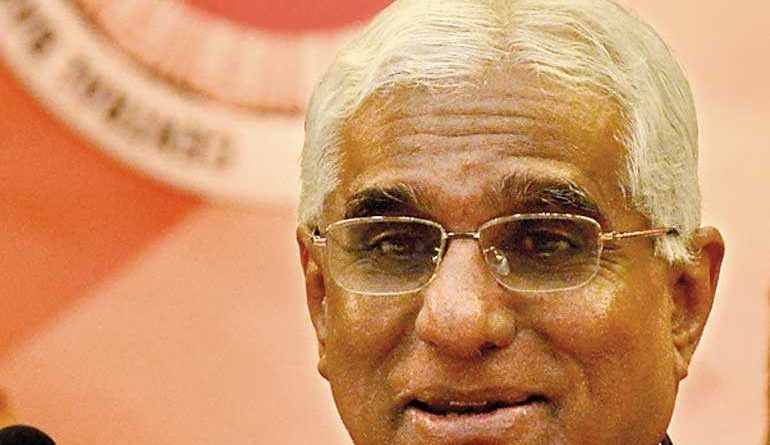 Picking up the threads in the New Year, the Central Bank yesterday announced plans to resume raising funds to repay $2.9 billion debt, oversee a pressured exchange rate, and build reserves to maintain stable macroeconomic fundamentals, but called for support from the Government to maintain fiscal discipline.

Sri Lanka’s growth for 2018 would only be about 3%, Central Bank Governor Dr. Indrajit Coomaraswamy told reporters after unveiling the customary Road Map 2019, which outlines monetary and financial sector policies for this year and beyond. Reserves have dipped to $6.94 billion, and the Central Bank was focused on raising the $1 billion needed to repay an international sovereign bond maturing in mid-Jan. Despite low growth and inflation, Dr. Coomaraswamy focused on a challenging external situation as the reason behind keeping policy rates unchanged last week, and insisted 2019 would be a challenging year unless vigilance was maintained.

“There is pressure on our reserves and exchange rate, and to reduce rates in such a context can be very counterproductive. Right now pressure on the external sector is most urgent, and we have to take that into account, and the Monetary Board is keen to avoid creating conditions that would increase pressure on reserves and the exchange rate,” he said.

Dr. Coomaraswamy acknowledged the Central Bank’s plans to raise funds to bolster reserves had been hamstrung by the political turmoil that erupted on 26 October, but said fourth quarter GDP numbers would give the best indication of the economic impact of the Constitutional deadlock that lasted seven weeks.

To meet the $1 billion repayment in January, the Central Bank would utilise the carryover of $650 million from the Hambantota Port joint venture, and funds from a term loan from China. Even though the Central Bank had a plan to raise money for debt payments, which was based on the Staff Level agreement reached with the IMF on 26 October, and the Active Liability Management Act that enabled the government to raise up to Rs. 310 billion, little headway was made due to the political unrest. In addition, People’s Bank, Bank of Ceylon, and National Savings Bank were readying to borrow funds, but that was disrupted as well, the Governor recalled. He acknowledged that capital outflow, which was worsened by the Constitutional standoff, had the largest impact on the exchange rate.

“Clearly the banks wanted to wait and see, and they wanted to re-price what they are willing to lend us, given that we have now gotten downgraded. I’m pretty sure we would not have been downgraded if we had a Staff Level agreement, as well parliamentary approval to raise funds, which we had. Now that we have been downgraded, we have had to renegotiate with various financing sources, but we have pretty much found the $350 million needed, but there are other obligations during the course of the year. We are now in the process of picking up the threads from where we were on 26 October.”

The Central Bank is also working towards the issuance of an International Sovereign Bond of about $1 billion or more, Dr. Coomaraswamy said, with the monetary authority concentrating on getting approvals and other administrative requirements ready to move quickly when the market is right. The Central Bank will also pursue Panda and Samurai bonds, as well as swaps with the Reserve Bank of India and the People’s Bank of China, as announced earlier. The Central Bank is also planning to avail itself of a $400 million swap available to South Asia Association for Regional Cooperation (SAARC) countries.

“Sri Lanka is a twin deficit country, and we have become so because of poor policies over a number of years. Essentially what we are doing now is a holding operation. We are trying to have strong macroeconomic fundamentals, on the back of that raise money and meet our obligations, and give ourselves time to increase investment and exports. That is the way to get out of this, but that is not going to happen tomorrow or the day after.”

Given that concessional funding is no longer available to Sri Lanka, as it is now a middle income country, the Government would have to be additionally careful to ensure there is no fiscal slippage despite elections, he emphasised.

“We don’t have aid group meetings to help us now. We have to go to capital markets to raise money, and if we have undisciplined Budget and poor policies, we will get downgraded again and lose access to capital markets. If we can’t raise money, then it would be very disruptive, because we would have to compress imports and this would result in people’s living standards deteriorating dramatically,” he warned.

In 2010, and to some extent 2015, even though Sri Lanka was a low middle income country, it was able to have populist policies targeting elections, as there were accessible funds at low interest rates in the markets, as all major Central Banks were doing quantitative easing, insisted Dr. Coomaraswamy. However, currently Sri Lanka’s borrowings are much higher, and global conditions have become much tighter, reducing space for large amounts of low interest borrowings.

“I get very disturbed because everybody, even fairly well-informed people, say the election is coming so they will have to loosen policy. We really have to smell the coffee. This is a different paradigm. We cannot keep making the same mistakes.”

Given the importance of improving reserves, the Central Bank had decided to limit foreign investment in rupee bonds to 5% from the previous 10% in an effort to improve reserve quality. Out of the current reserves, only $900 million is defined as short term money, which is in line with Central Bank efforts to encourage long term funds, such as ISBs and syndicated loans, which will remain for a year or longer to meet debt repayments.

“In an environment of increased volatility, Foreign Institutional Investors (FIIs) provide very footloose money. It comes in and goes very fast. So these are the people we gave 10% to in very benign financial conditions, but now it’s better not to have as much exposure to them. The unwinding of swaps also created a liquidity shortage in the money market, and that has been addressed through open market operations,” he said.