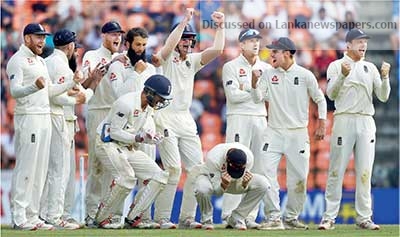 Members of the England cricket team celebrate after Angelo Mathews’ dismissal was confirmed by the television umpire during day four of the second Test at the Pallekele International Stadium. ‘Mathews not for the first time, allowed an intervening break to interfere with his concentration and with his demise, the enemy gleefully closed in,’ writes Rohan Wijeyaratna.

It is to the eternal credit of the standard of cricket in the island that the game could rise above the mediocrity which surrounds it, and still remain competitive. Unlike the Government or the Cricket Board, cricket in the middle isn’t in a total shambles altogether. It cannot be, if the team – sans so many big names – could still manage to stretch the enemy till almost the very end. Given its glorious uncertainties, with a little bit of luck Sri Lanka might even have pulled off an improbable win at Pallekele. Cricket off the pitch however, remains quite another story.

The splendidly forthright Rex Clementine tells us that if not for some sporting Englishmen who gave up theirs, the second Test would not have taken place at Pallekele for want of rooms to put up the two teams! ‘Preposterous’ would be a very polite word to use to describe such a pathetic state of affairs. It is a telling indictment on the competence of the Competent Authority appointed to look into the cricket by someone above him, whose judgment certainly deserves questioning.

Not that one could blame the Competent Authority alone, for it is a job he doesn’t fully know. But what of the CEO of the Board, one might justifiably ask? He’s been in the job long enough to know the ropes and should have known the priorities, never mind who constituted the Board. The fact is, nobody could put right a cricketing firmament that believes only three persons or their family members could run Sri Lankan cricket from a population of 22 million people. That is a telling indictment on the way things are run in a country where mediocrity holds sway. It is as ridiculous as the claim made by some, that only Rajapakse or Wickremasinghe could effectively govern this country, never mind Sirisena who is there only to provide distraction if not entertainment. But all that is quite another story, best left to the experts to dissect at some later time.

England following the sagely advice of the long dead W.G. and never being in doubt, promptly decided to bat first once the toss was won. The strip at Pallekele was as dry as a bone and it didn’t take a wizard to figure out it would assist spin at some point during the first day. If nothing else, Joe Root’s form with the toss must have cheered the cockles of all the English hearts; for everyone in the English camp feared a pitch related comeback, once the Galle Test was lost. Anyway, Sri Lanka left out its second pace bowler, having fore-knowledge of what to expect.

While in some countries the practice of dictating to the Curator might still prevail, this column believes that in the more progressive countries cricket authorities will make bold to convey their pitch preferences to Curators only at the risk of being told off in clear language. Sri Lanka has had some great fast pitches in the past and produced some great fast men, but the recent craze over dusty brown tracks has been in the perceived belief that the other side cannot play spin. They forgot that among the current English planners are two men who were former Sri Lankan coaches as well, in the not too distant past. Consequently, England armed themselves to their teeth with spin, and were ready to face any eventuality on equal terms.

Honestly, Sri Lanka must make the effort to move away from the negative belief that both England and Australia make it a habit to present on purpose, grassy decks which are havens for seam, pace and bounce. The planners in Sri Lanka would do well to take a cue and leave the Curators to their job and demand instead, good wickets which offer something for everyone over the space of five days. Application of undue pressure on Curators will only help shut out some players from claiming a fair share of the spoils in a Test match, or, shut them out completely from playing in the match. Besides pitch interference is aimed at influencing the result of a match. Either way it isn’t cricket. The story of this Pallekele Test match is that Sri Lanka attempted to influence the result by doctoring the wicket and the wicket bit them back. ‘Win the toss and you win the match’ certainly seemed to work here, to a very large extent.

Going by ‘The Island’ report on Monday the 19th, Chandika Hathurusingha had admitted that England’s tail had hurt his team and this had caused the loss of the series. Had our coaching staff been more sensitive to the strengths and weaknesses of their opposition, they would have noticed England has no ‘tail’ until James Anderson walks to the middle. Instead, they have a highly efficient ‘lower order’. A closer perusal of what went on during the English summer would have revealed the danger of underrating the English lower order which follows Jos Buttler. There are many first class centurions amongst them and to take any of them for granted would be at one’s own peril. Even Chris Woakes who hasn’t been able to find a place in the side for his main strength – bowling – is a Test match centurion. Yet, even today, he would not be classified as a Test match all- rounder; just a fast bowler who can bat. And Anderson – the only genuine tail ender in that side, has been working hard on improving his ‘stickability’ with the bat, as has been clearly evidenced.

In the end it all boils down to aims, objectives and standards which are set, achieved and maintained by the coaches. If Dilruwan Perera is described as an ‘all rounder’(as was heard during the commentary) instead of a bowler who could bat a bit, one recognizes immediately the level of expectation. Now that Mathews has given up bowling, there are only two possible contenders for the all-rounder status in this Sri Lankan side. They are Dickwella and Dananjaya de Silva. Both however have a distance to go to fully earn that tag, since their secondary strengths – batting and bowling – still remain below the expected requirement at Test level. Essentially, an all rounder must be able to command a position in the side for each of his strengths when taken singly. There is no one in that side who could be termed a Test all-rounder, barring Angelo Mathews and that is, the Angelo Mathews of old.

Of the Sri Lankan fielding – the less said the better. Over the years Sri Lanka has defied or ignored the call for athleticism in their men as a primary qualification for selection. For their negligence, they are now paying the price. Today’s Test cricketer is essentially an athlete of the Kusal Mendis and Dananjaya de Silva variety; supple of body and quick of reflexes. Stiff-bodied men, however good with bat or ball will struggle to find a place in any future Sri Lankan team. To watch Pushpakumara at long on in sunglasses late in the day, drop Curran’s parabolic heave to long-on which fell on his lap, was painful and shameful to watch. The Sri Lankan ground fielding was uninspiring and so was the captaincy. The latter was often short of innovation or the ability to recognize and seize the moment. The ease with which Curran crossed over off the fifth or sixth balls of each over while setting up that match defining last wicket stand in the first innings, was suggestive that the Sri Lankan captain was near brain dead from the assault. It has been a very costly oversight to have overlooked Mathews as captain in Chandimal’s absence. For the record, Curran hammered five sixes in his first 50, and was out at 66 when attempting his seventh which failed to carry the distance. It was pure mayhem while it lasted.

There were several match defining moments; some which were seized, some others not. The pyrotechnics of Curran with his aerial assault which gave England such a fillip, was the first of them. The sedate and assuredly comfortable batting of Dimuth Karunaratne and Dananjaya de Silva in tandem on day two- which importantly telegraphed to all that the bowling held not the many terrors as was perceived, was the second. The sheer brilliance of Stokes’ running out of Karunaratne was another defining moment; clearly the only way possible at the time for England to see the back of Karunaratne, given his great touch. The composed batting of Roshen Silva which not only held the middle order together but immeasurably helped the home team achieve a crucial first innings lead, must also rank as a significant milestone achieved. Then comes the singular significance of Joe Root’s near lone hand, along with Ben Foakes’ almost unfailing contribution, both of which played such an important part in establishing the final challenging target. And finally, there was Dimuth Karunaratne’s second 50 of the match and Angelo Mathews’ masterly assertive 88 which had the potential to turn the match but was not to be. Mathews not for the first time, allowed an intervening break to interfere with his concentration and with his demise, the enemy gleefully closed in. Had Mathews continued in the same vein as before and was better supported by those around him, the result might well have been entirely different.

Not counting the fielding

In the end the better side won, no doubting that; but the difference was more in the discipline, approach and commitment than skill alone, given that the chief weapon of the visitors – swing and pace, had been already neutered. That is, not counting the fielding, in which area England clearly left Sri Lanka a country mile behind.