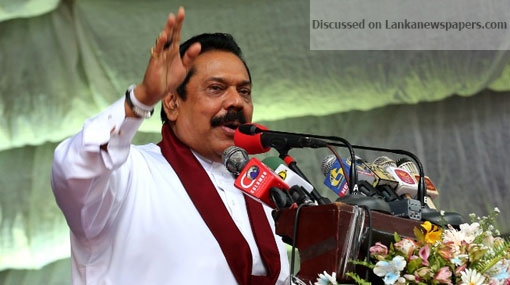 Prime Minister Mahinda Rajapaksa says that forcibly or unlawfully removing him from the Premiership will not be an easy task.

He stated this during an event held at the Kasagala Raja Maha Vihara in Weeraketiya, yesterday (16).

He stated that today the Parliament is similar to a ‘comedy hall’ and that he is prepared to give up the Premiership if a no-confidence motion is presented in a legal manner.

Rajapaksa stated that although there is no issue with regard to an MP voicing his objections, certain actions should be taken with regard to bringing a knife into the Parliament’s chamber.

However, so far no actions have been taken with that regard, he said, referring to allegations that a UNP MP had brought a knife into the parliament during the chaos on Thursday.

He said that if this issue cannot be resolved within the Parliament, the people should be given the opportunity to do it.

Rajapaksa further said that if attempts are made to unlawfully remove him instead, they are ready to fight such moves.