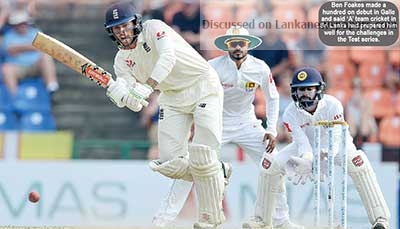 Some of the young players that England have brought to Sri Lanka for the ongoing bilateral series have had an impact on the tour. The likes of Sam Curran, Ben Foakes, Rory Burns, Keaton Jennings and Jack Leach have come up with match-winning performances with Sri Lanka playing catch up cricket.

Curran and Foakes have been so good that they have managed to keep some of England’s finest players like Stuart Broad and Jonny Bairstow on the bench. Broad for your information has represented England in 123 Test matches while Bairstow is a veteran of 59 Tests.

These young England players have taken to international cricket like ducks taking to the water. In countries like England and Australia, the gap between First Class and Test cricket is not so wide, so the players adjust quicker than those from our parts of the world. But still, most England teams and particularly the young one shave struggled in the sub-continent. Not this time though. If you may wonder what the reason is, England have invested a lot on their development squads.

Foakes spoke about the importance of playing ‘A’ team cricket after his hundred on debut in Galle. “Coming out here and playing cricket gives you good experience. The England Lions tour two years ago was good. Having experience of playing in this heat before was helpful,” said Foakes.

England ‘A’ or England Lions as they call it have toured the sub-continent frequently in recent times and when the players come for Test cricket they adapt quickly.

Sadly Sri Lanka Cricket has refused to invest heavily on ‘A’ team cricket. Our authorities badly lack priorities. Their number one priority upon being elected to office is to dole out money in millions to member clubs and other stakeholders who vote them to office. Their next priority is to put up cricket grounds and cricketing facilities to please the politicians they serve.

Arjuna Ranatunga was booted out as Chairman of Sri Lanka Cricket because he refused to approve the construction of an international cricket stadium at Hambantota. His brother shamelessly agreed for the suggestion and the venue that cost Sri Lanka Cricket an arm and a leg has become a white elephant today.

Ten years later, Sidat Wettimuny was removed as Chairman of SLC as he said no to a cricketing facility in the Kurunegala District, the electorate of then Sports Minister and his successors were too glad to approve the project.

Pollonaruwa District that has seen little cricket over the years is in the list of mega cricketing development projects next for obvious reasons.

With these vanity projects costing SLC a large chunk of money, the board runs out of resources to spend on vital aspects of the game like development of young players.

For the whole of this year, Sri Lanka ‘A’ have played just one series against Bangladesh whereas other teams are giving frequent opportunities to the promising players and those who had fallen off the radar.

Sri Lanka had invested heavily on ‘A’ team cricket sometime back. It was not only meant to groom the players but to help others to get back the senior side. Tilan Samaraweera when he was axed from the national team after the England tour of 2006 went back to ‘A’ team and forced his way back to the senior side. Many others also have done so.

In the past, even international teams used to tour Sri Lanka to play our ‘A’ team. A strong Kenyan side comprising Steve Tikolo, Maurice Odumbe, and Thomas Odoyo toured in 2001. That side played three four day unofficial Tests and five one-day games and  both series were hard fought.

In our country where First Class cricket is not at its best with half a dozen team competing, at least ‘A’ team cricket has to be strong with regular inbound and outbound tours for players to be prepared for the challenges in international cricket.