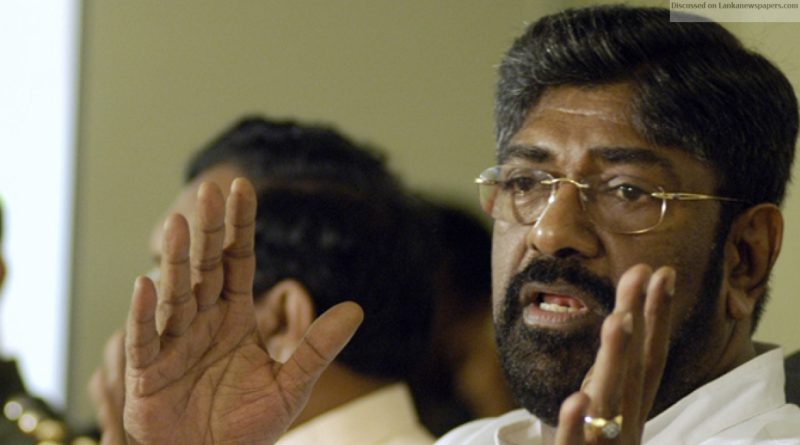 ormer State Minister Kaheliya Rambukwella said in Kandy on Saturday (17) that the government was ready to respond positively if the UNP-JVP-TNA presented a no-confidence motion against the Prime Minister Mahinda Rajapaska in a proper manner.

“If the motion of no-confidence is presented in a proper manner we will not run away; we will face it,” said Minister Rambukwella at the meeting of the Senkadagala Balamandalaya of the Sri Lanka Podujana Peramuna (SLPP) at Sri Pushpadana hall.

We are not ready to respond to no-confidence motions tabled in a haphazard manner, Rambukwella noted.

The Speaker should have the courage to follow the accepted norms and established parliamentary procedures in tabling a no-confidence against incumbent Prime Minister instead of just reading out a paper given to him by the Janatha Vimukthi Peramuna (JVP), State Minister, Rambukwela told the meeting.

Speaker Karu Jayasuriya had received a paper that was given to him by MP Vjitha Herath of the JVP, Rambukwelle said.

The UNP was making a false claim that a judgement had been given by the Supreme Court when the case was to he heard on December 4, 5 and 6, Rambukwella said.

The Speaker was responsible for the sad situation in Parliament. The conduct of the Speaker had brought the House into disrepute. Chili powder and projectiles had been thrown into the House by the UNP goons in the public gallery, Rambukwella said.

Rambukwella said that though the UNP, the JVP and the TNA had attempted to belittle the Prime Minister Mahinda Rajapaksa, people were grateful to Rajapaksa for having restored peace and security by wiping out terrorism.

The President had the power to put off parliamentary sitting at any moment. He was constitutionally empowered to prorogue Parliament for two months.

The Opposition was engaged in a futile struggle to oust the Prime Minister appointed by the President in keeping with powers vested in him by the constitution, Rambukwella added.

Former Central Province Governor Tikiri Kobbekaduwa told the meeting that Sri Lanka was facing a decisive moment as the UNP, together with its allies, was defying action taken by the President of the country in appointing a new government by using powers.

The President had taken steps to appoint Mahinda Rajapaksa to avert a disastrous situation in the country, former Governor Tikiri Kobbekaduwa said, adding that speaker Jayasuriya could not prevent the President from exercising powers constitutionally vested in him.