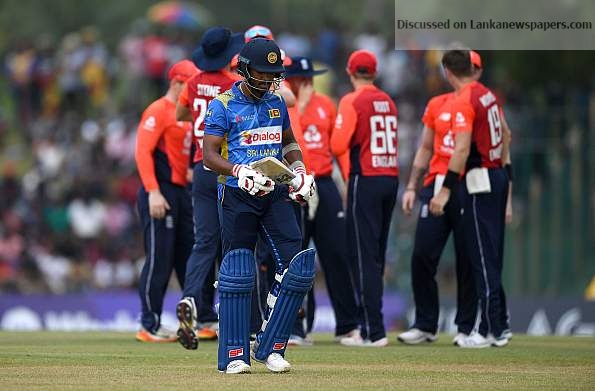 England have taken a 2-0 series lead over Sri Lanka after victory in another rain-affected match in Pallekele.

An excellent spell of spin bowling from Adil Rashid and the well-controlled variations of Tom Curran held Sri Lanka to a total that always appeared significantly under par before Eoin Morgan marshalled a calm and controlled run chase. Victory was perhaps even more comfortable than the margins – seven wickets and 15 deliveries to spare – suggested. Sri Lanka, who have now lost 32 of their last 42 completed ODIs, will need to win both the remaining games to square the series.

In many ways, this was a deeply forgettable encounter. With the toss delayed for more than five hours by rain, the match was reduced to 21-over per side and both gripping the ball and retaining footing proved challenging throughout. Not for the first time, the folly, greed or desperation (delete as appropriate) of scheduling a tour during the monsoon period was clear to see. Every day of cricket on England’s tour has been affected by rain.

But an England side that is working hard to shed its reputation as flat-track bullies will take heart from such a professional performance in trying circumstances. When their Champions Trophy hopes were halted at the semi-final stage by a skilful Pakistan side and a used wicket, England recognised they had to learn some adaptability if they were going to go the extra step in such tournaments. They couldn’t just plunder vast scores on perfect batting surfaces; they had to learn to win when the ball spun or seamed or even stopped.

In that respect, this soggy series may yet prove a valuable learning experience. While conditions are unlikely to bear much comparisons with those expected at the World Cup in England next year, that ability to play in a slightly more clinical manner – and the calm which is required to do so – is an adaptable skill that will serve them well.

There were a couple of nervous moments here. When left-arm spinner, Amila Aponso, opened the bowling and had Jonny Bairstow miscuing to mid-off and then skidded one through Joe Root’s forward press, England found themselves at 34 for 2 and facing the prospect of a nervy chase.

But so fluent was Jason Roy and so assured Morgan that Sri Lanka were never able to build any pressure. While Sri Lanka’s batsmen faced 53 dot balls, England faced 37, managing to rotate the strike and find the gaps with far greater freedom.

And while Roy’s impressive innings – he got off the mark with a six flicked over midwicket off Lasith Malinga and lofted another off Akila Dananjaya – was ended when Sri Lanka reviewed a shout for leg before, so good is the form of Morgan and Ben Stokes, that victory was achieved without Jos Buttler – perhaps England finest ever ODI batsman – being required to bat.

Morgan has now been dismissed just once on this tour – including the warm-up game – for an aggregate of 255 runs, while Stokes looked back to his best. He got off the mark with an apparently gentle push that raced to the long-on boundary and subsequently hit two sixes: one a scoop off Nuwan Pradeep that would have pleased Buttler; the other a thrash down the ground off Aponso that sealed the game.

Sri Lanka had started the match brightly. With Niroshan Dickwella striking the ball beautifully, Sri Lanka hit nine fours in the first three overs – Olly Stone’s first over, which cost 17, included four of them – and raced to 55 without loss after five.

It was to prove the high watermark of their performance. The next 16 overs realised only 95 runs and nine wickets as they lost their way against a disciplined England side that showed fine control of their variations with the ball and continued to field well despite the slippery conditions.

If Curran started the rot with a perfect slower-ball delivered out of the back of his hand – Dickwella’s attempt to hit over the top resulted in a comfortable catch for mid-off – it was Rashid who inflicted the more serious damage. Striking with his second delivery, a fine googly that deceived Kusal Mendis, he followed with the wicket of Thisara Perera, whose attempt to thrash his first ball out of the ground resulted in a skied catch, and Dasun Shanaka who was also deceived by a googly.

And, if the wicket of Sadeera Samarawickrama, who mishit a horrid full-toss to square-leg, owed more than a little to fortune, perhaps Rashid deserved it for retaining his composure and control despite the damp ball and decent batting surface.

Dinesh Chandimal’s unconvincing innings – his 34 from 42 balls proved well off the pace – was ended by another fine back of the hand slower-ball from Curran who continues to make a strong case for inclusion in England’s full-strength side. They are the sort of problems a team loves to have a few months out from a World Cup; the sort of problems Sri Lanka must dream of at present.