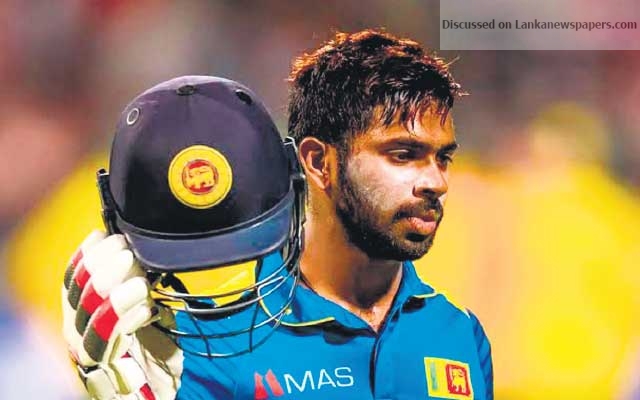 With the top order contributing runs for the first time in four matches, it’s the middle order that failed Sri Lanka in the shortened third ODI against England. So said Niroshan Dickwella, the batsman who had given Sri Lanka their fast start, hitting 36 off 25 balls to set the team on course to a score of 58 for 1 by the end of the Powerplay.

Just after the 12-over mark, however, Sri Lanka’s innings started to wobble. They lost Sadeera Samarawickrama to an Adil Rashid full toss, the batsman top-edging what should have been a straightforward sweep to the short fine leg fielder. Next ball, Thisara Perera attempted to launch the first delivery he faced into the next galaxy, and managed only to top-edge it into the deep. When Dhananjaya de Silva fell at the start of the 16th over, Sri Lanka had lost three wickets for 18 runs.

Eventually, due in part to a laboured 34 off 42 balls from Dinesh Chandimal, Sri Lanka mustered only 150 for 9 from their 21 overs – a total that always seemed light on a night when the bowlers struggled to grip the ball.

“We got a good start but we were 20-25 runs short,” Dickwella said. “After being 92 for 2, it was 92 for 4 suddenly. That was the main turning point. If Thisara could have batted five overs at that time, we would have ended up with a score closer to 190. You can’t win a 21-over match with only 150 on the board. The ball was also wet because of the rain. If we had made 175, it could have been a winning score.”

Sri Lanka’s batting has been consistently modest since the start of 2017, in which they’ve now lost 32 games out of the 42 they have played. They had lost four top-order wickets inside the Powerplay in the second ODI, essentially surrendering the game in that period. Now, in this match, batsmen further down the order have failed to make an impact, with Thisara and de Silva producing three runs off 11 balls between them.

Though on this occasion, Dickwella was perhaps justified in attacking relentlessly as the match had turned into a virtual T20, he has been guilty of being wasteful with his wicket after he has made a promising start. He had reached double figures in five of his seven previous innings, but had only once made a half-century. It’s a shortcoming he admits to.

“I can’t be satisfied with my performance. A lot of times I get 30 or 40, but only about one in five games do I go on to get 70 or 80. Today was a shortened game so it’s different. Once I got 30 I tried to keep going at the same tempo, because we had wickets in hand. But overall when you look at my one-day cricket, even though I’ve got starts, I haven’t capitalised and turned them into big innings.”