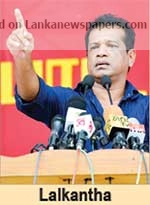 The present crisis cannot be resolved by forming a caretaker government with Mahinda Rajapakass as the PM, the JVP says.

Addressing the media at the Centre for Society and Religion in Maradana, JVP trade union wing leader and politburo member K.D. Lalkantha said that the need of the hour was to dissolve parliament and allow the people to elect a new government.

“People are undergoing tremendous hardships. This is not a yahapalana government but a janapeedaka (suppressive) government. There is an economic crisis because the government is overdependent on the US dollar. The solution to this crisis is not to make Mahinda Rajapaksa the prime minister while letting Maithripala Sirisena continue as the President. These very same people have been in power from time to time and, today, we pay for their sins.

“We had a dictator then and we have a puppet now. We have to end this that is why we have presented the 20th Amendment to the Constitution to give more powers to Parliament. For that purpose we are forming a people’s movement.”

JVP Central Committee member Wasantha Samarasinghe and other trade union leaders addressed the media on the progress of the party’s plans to hold a demonstration in Colombo on Oct. 23 against the government.