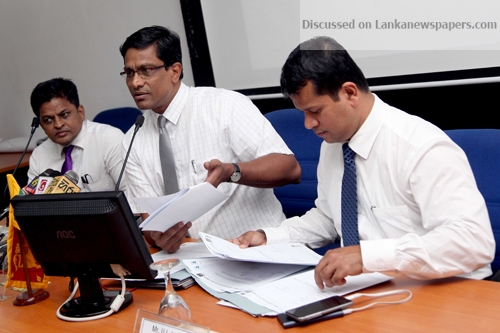 The Football Federation of Sri Lanka (FFSL) came under attack on Wednesday when the Committee on Public Enterprise (COPE) questioned its officials for over two hours, leveling several charges including an alleged attempt to cover up two financial frauds running into millions of rupees.

The first, which took place in 2008 and is currently before courts, implicates a former football official who was accused of having embezzled over Rs 38 million in foreign funds donated for football development by various international and local parties. The second is a fraud of Rs 25 million allegedly committed by the former finance manager over a period of time. The case is now with the Criminal Investigation Department (CID).

Before presenting the audited accounts to their membership at the last annual general meeting, the FFSL has removed from it a section regarding a fraudulent transaction of Rs 19mn, documents seen by the Sunday Times evidenced. The FFSL has also asked that the 2013 audited accounts be re-visited, claiming that auditors may have been misled by football heads.

FFSL President Anura de Silva, Secretary Jaswar Umar and Sports Ministry Secretary Kamal Dharmasiri were questioned at the COPE. De Silva was asked about a matter now before the Court of Appeal whereby he has given a sworn affidavit retracting an earlier statement in which he backed the audit findings of several fraudulent transactions between 2004 and 2008.

Football officials, under heavy questioning, admitted to forgery, COPE Chairman MP Sunil Handunetti said. But they had blamed the “suspended” former of Finance Manager who is now under investigation for allegedly misappropriating over Rs 25mn.

But COPE did not buy into this as audited accounts are sent directly by the Auditor General’s Department to the president of each respective sports body with copies to the Sports Ministry Secretary and the Director General of Sports. The Committee had repeatedly asked how the audited accounts ended up with the Finance Manager when it was addressed to the FFSL President. The officials claimed that he had obtained a copy from the Auditor General’s Department.

“We were completely misled by the finance manager,” insisted de Silva. “We didn’t know until it was pointed out to us by the auditors. He had obtained the audit report and altered it by removing the sections on financial irregularities and then had it reprinted along with the Annual Report.”

Former Sports Minister Mahindananda Aluthgamage, a COPE member, had also come down hard on FFSL for allegedly attempting to cover up a series of financial frauds after 2004 by requesting for a re-audit.

The allegations relate to the depositing into private accounts Euros 40,000 donated by the Italian football players for renovating the Kalutara playground; US$ 60,000 received for hosting the Pakistan Football Tournament; and Rs 10 million donated by Holcim Lanka Ltd to FFSL to repair tsunami-damaged houses. A sum of US$ 40,000 from a total of US$ 200,000 received for hosting of South Asian Football Tournament is also reportedly “missing”.

“Upali Hewage, a former Secretary, made a statement saying the auditors may have been misled by interested parties when they submitted documents back in 2013,” de Silva said.  “So we decided to hold an inquiry on which basis we asked the auditors review their audit reports.”

While the inquiry report was prepared by incumbent Secretary Jaswar Omar, he had not contacted former FFSL President Ranjith Rodrigo who was largely responsible for unearthing these goings-on.

“The findings of the auditors were endorsed by a five-member committee appointed by the Ministry of Sports,” MP Handunetti asked. “How can these people twist their tongues now? We will not accept any report and we will summon them in two weeks to answer all our queries.”

Handunetti will also urge the Attorney General’s Department to proceed with the case as a matter of urgency.

Also examined at COPE was de Silva’s retraction of a statement he had made endorsing the original audit findings. He now denies taking that stand and has given an affidavit to this effect.