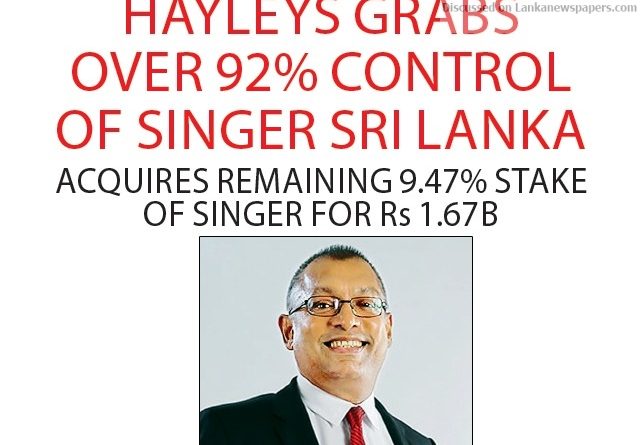 Sri Lankan listed diversified conglomerate Hayleys PLC and its subsidiaries yesterday (15) grabbed over 92% control of Singer (Sri Lanka) (SSL) PLC by acquiring the remaining 9.47%, or 35.6 million-share stake of SSL for Rs 1.67
billion, Hayleys Group Executive Director Sarath Ganegoda told Ceylon FT.
The seller was former Singer controlling shareholder and Singer Asia Limited subsidiary Retail Holdings (Sri Lanka) BV (RHSL), and the selling price was Rs 47 per share. Yesterday, Singer shares closed at Rs 31 per share, up Rs 1.40 or 4.73% compared to Friday’s market close.
Prior to yesterday’s deal, Hayleys PLC together with its subsidiaries Hayleys Advantis Limited, Hayleys Agriculture Limited, Hayleys Aventura Private Limited, Volanka (Pvt) Limited, Carbotels (Pvt) Limited and Dhammika Perera, had control of 82.81% of the issued shares of Singer Sri Lanka.
In September last year, Hayleys PLC and its subsidiaries acquired 61.73% of SSL shares for a consideration of Rs 10.9 billion, making it the single-largest acquisition for a listed company in Sri Lanka in recent times. The deal was then funded through margin loans provided by National Savings Bank (22.67% share acquisition), People’s Bank (22.67% share acquisition) and Hatton National Bank (10.73% share acquisition). At the same time, Hayleys also entered into a further agreement with Retail Holdings (Sri Lanka) BV, to purchase, either by itself or through its nominee, the balance shareholding of 35.6 million shares, constituting of 9.47% held by RHSL in SSL, within a period of 12-15 months from the date of the initial transaction, at the price option of Rs 47 a share.
Under the Hayleys umbrella, Singer has aggressively promoted its online sales, while maintaining its reasonable outlet-based business.
“Today, we (Hayleys Group) have concluded the entire Singer acquisition from the Retail Holdings (Sri Lanka) BV and now we (Hayleys PLC and its subsidiaries) have over 92% control of Singer Sri Lanka,” Hayleys Group Executive Director, Sarath Ganegoda said yesterday.
However, market sources said that the Hayleys Group intends to divest its minority stake in Singer (Sri Lanka) while holding controlling
powers of the company.
“To reduce Hayleys PLC’s heavy debts and maintain its  minimum public holding requirements, they will definitely divest a minority stake in Singer (Sri Lanka) with a reasonable capital gain per share. They have already commenced negotiations with global consumer retail industry investors,” market sources revealed.
“We are over-leveraged at the moment, but we are not worried,” Ganegoda told a recent press briefing organized to mark the conglomerate’s 140-year journey in Colombo.
“We have a very clear target set in terms of liquidity. Our target is debt-to-EBITDA of not more than three times, and we are working towards it. Yes, we are overleveraged, but we are not worried,” Ganegoda then said.

Fitch ratings predictions about Singer
However, global rating giant Fitch ratings recently said that Sri Lanka-based consumer durable retailers’ operating cash flows are likely to weaken following new Government regulations that impose a 100% cash margin on the import of most types of consumer durables.
“The credit profiles of rated retailers, such as Singer (Sri Lanka) PLC (A-(lka)/Stable) and Abans PLC (BBB+(lka)/Stable), may come under pressure from lower sales volume and higher working capital needs, particularly if the rules remain in place for an extended period,” it stated.
The cash margins, imposed on 29 September 2018, aim to stem the weakening of Sri Lanka’s local currency, which has fallen by 10% year to-date. Previously, retailers were able to open letters of credit with banks without any cash margins.  Fitch expects prices of most consumer durables to increase amid local-currency depreciation and higher funding costs from the new margin requirement, depressing sales volume. Demand for consumer durables has already dropped due to the country’s contracting discretionary income levels. Retailers could absorb some costs to remain competitive and defend volume in the weak demand environment, but that could further cut into their already weakening operating margins.
“We estimate that Singer and Abans import around 80%-85% of the products they sell and believe the regulated items will account for almost 50%-60% of such products. Singer’s comparatively larger local-assembly operation for refrigerators and washing machines should help mitigate the impact, as the new margins only apply to finished goods,” Fitch said.
According to Fitch, Singer’s net leverage as defined by lease adjusted net debt in the last 12 months trailing EBITDAR, improved to 5.1x as of 30 June 2018, from 5.5x as at 31 March 2018.