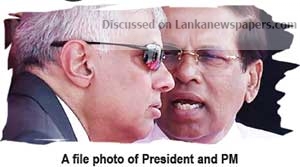 President Maithripala Sirisena and Prime Minister Ranil Wickremesinghe had a heated argument, at yesterday’s Cabinet meeting, over the East Terminal of the Colombo port to India, according to well informed sources.

Responding to a query, sources said that the PM had brought to the notice of the President that India was interested in the terminals, but the latter had said the East Terminal would be given to the Sri Lanka Ports Authority (SLPA).

The Cabinet meeting preceded that of the National Economic Council at the Presidential Secretariat. PM Wickremesinghe did not attend the NEC, chaired by President Sirisena.

PM Wickremesinghe revealed India’s interest in the East Terminal. That prompted Sirisena to express serious concern over foreign involvement in everything.

President Sirisena, then revealed that he had already informed India that the East Terminal wouldn’t be given to it and if it wanted a terminal it could look at the West Terminal and make the required investment.

During the meeting President Sirisena mentioned the arrest of an Indian national allegedly involved in assassination plot targeting the President and wartime Defence Secretary, sources said.

Sources pointed out that there had been no consensus between the UNP and the SLFP over the development of the Palaly airport with the latter declaring Sri Lanka would handle the project with the SLAF tasked to lay new runway.