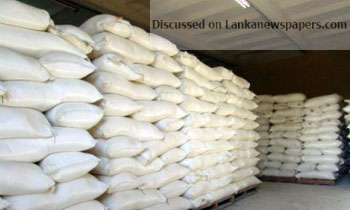 Speaking to the Daily Mirror he said 5,000 tonnes of sugar was already stuck at the Colombo Port after imposing an extra control price.

Therefore, the Association had requested the President to release the Customs tax imposed on sugar imports. But the President did not agree. Finally it came to a conclusion of reducing the Customs release tax to Rs. 31 until the imported stocks get cleared from the Port.

He said the President was also told to have a more detailed discussion at the next Cost of Living Committee meeting.

“The price of a metric tonne of sugar in the Indian market which was at US$ 340, US$ 400 in the London market and US$ 390 in the New York Market had been increased by US$ 8 from yesterday,” he said.

Mr. Senavirathne said the Association had decided to stop importing sugar temporarily due to the world market and Indian market sugar price hike and after imposing an extra control price on sugar import by the Government.