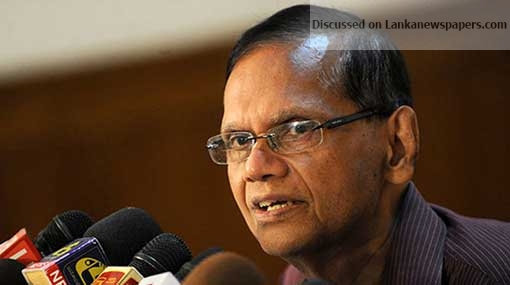 The Sri Lanka Podujana Peramuna (SLPP) yesterday alleged that President Maithripala Sirisena, in spite of being the Commander-in-Chief of the armed forces, was a prisoner in the UNP-led administration.

SLPP Chairman Prof. Peiris asserted that President Sirisena was incapable of dealing with what he called an unprecedented police conspiracy.

Addressing the media at former President Mahinda Rajapaksa’s Nelum Mawatha Office, Prof. Peiris emphasized that the government owed an explanation as regards its failure to take Deputy Inspector General of Police Nalaka de Silva, the senior officer in charge of the Terrorist Investigation Division (TID) into custody in spite of his alleged involvement in conspiracy to assassinate President Sirisena and wartime Defence Secretary Gotabhaya Rajapaksa.

Prof. Peiris said that no arrests had been made though the alleged conspiracy was revealed on Sept 13.

Flanked by UPFA lawmakers, C.B. Ratnayake (Nuwara Eliya district) and Piyal Nishantha (Kalutara district), Prof. Peiris explained how IGP Pujith Jayasundera, too, had been placed among those who were allegedly involved in the assassination plot. The former Law Professor pointed out that the IGP had authorized the releasing of two Light Machine Guns (LMGs) from the Central Armoury to the TID. These weapons had been taken out of the TID for a couple of days before being brought back without any entries, Prof. Peiris said, adding that it would be of pivotal importance to establish the circumstances under which Nalaka de Silva sought the assistance of the elite Special Task Force (STF) to train some of its men in para-military operations.

“A thorough inquiry is required to identify the hidden hand behind the conspiracy,” Prof. Peiris said.

The SLPP Chairman said that it had transpired that DIG De Silva got to know whistle blower Namal Kumara through IGP Jayasundera. Prof. Peiris asserted that sufficient attention hadn’t been paid to the IGP’s role in Nalaka Silva meeting Namal Kumara.

Commenting on the conspirators having some role in Digana violence directed at the Muslim community, Prof. Peiris said that there should be a no-holds barred probe into a Sri Lankan based in France funding troublemakers here.

On behalf of the Muslim community, an MP recently complained to the CID regarding the threats directed at the community and its leaders.

One thought on “Sirisena a prisoner in UNP-led govt”