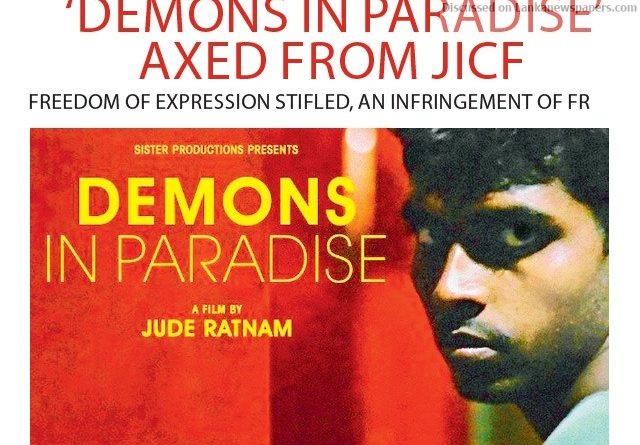 The prestigious Jaffna International Cinema Festival ran into controversy following a decision taken by the organizers to withdraw the movie, ‘Demons in Paradise’ of Director Jude Ratnam from the scheduled screening. The movie criticizes the actions of the Liberation Tigers of Tamil Eelam (LTTE) during 30 years of bloody war in Sri Lanka.

‘Demons in Paradise’ had been scheduled to screen on 5 October, 2018 at 6:45 p.m. at the Majestic Cineplex, Jaffna. It is the first ever movie produced by a Tamil movie maker which criticize the alleged crimes committed by the LTTE especially to their own Tamil
community.

Demons in Paradise
Ratnam’s documentary movie received red carpet honour at Cannes Film Festival 2017. This gave the opportunity for the movie to travel many other international film festivals around the globe. It was later screened in the South of Sri Lanka a few times, but never had the opportunity to be screened in Jaffna.
The 40-year-old director, who had to flee from Colombo to escape the Black July 1983 with his family, when he was 5 years of age, highlights the alleged cruelties and unjustifiable actions committed to their own community – the Tamils they were supposed to be defending, by the Liberation Tigers of Tamil Eelam (LTTE) through this movie.
Ratnam believes a wide discussion should be initiated within the Tamil community on the LTTE. Although the LTTE is infamous for suicide bombings and recruiting child soldiers, many hail it as a heroic organization and it was their major protection against alleged anti-Tamil actions of Sri Lankan governments and armed forces throughout the history.
In one scene of the film a former LTTE fighter speaks about the alleged LTTE massacre of hundreds of Tamil Eelam Liberation Organization (TELO).
“We can’t justify the massacring of TELO militants. There’s no reason for that. We could have at least spoken to them first. However, there was no dialogue. We caught them and we killed them straight away! We killed all of them, 800 – 900 people.”
“Many of them were involved in the TELO massacre. Like the ones who were in the Jaffna camp and I know they are alive. They are living in Canada now, with their children. They’re living happily. But I don’t know if they even feel guilty.”
Those individuals (TELO militants) had come to fight for the people. It is pathetic, how we killed them so simply. We were so cruel. You cannot accept that in the name of struggle, the ex-militant says.
In an interview with the BBC, Ratnam had said that he wanted to warn the Tamil community, especially the Tamil diaspora to think about the consequences about romanticizing the LTTE.
“In the diaspora you tend to live in a bubble that you left your homeland and you have this nostalgia about it, whereas the truth is that even back at home things change. Those who faced the brunt of the war, they would probably welcome this film more,” he stated.
However, Ratnam received a backlash from the Tamil community for the movie. He was not surprised by it, the director said,
“Acknowledging the vice in our [Tamil] community is how we can get away from it. If you keep denying it and play the victim card all the time, then you invariably return to it.”
“When the war was coming to an end, I wanted the [Tamil] Tigers to lose the fight. I wanted it to end, even if my own people had to be killed,” he said.

Jaffna International Cinema Festival
The fourth edition of the Jaffna International Cinema Festival is being held from 3 to 8 October across different venues in Jaffna.
However, in a surprising move the organizers of the festival informed Ratnam on Monday (01) that it had been decided to remove the movie from the festival due to the pressure of a certain group called ‘community,’ in a media release the Director said.
He stated, “My film was invited by the Jaffna International Cinema Festival this year and the screening was scheduled for October 5, 2018 at 6:45 p.m. at the Majestic Cineplex Jaffna. I had provided the film to the festival with the required technical standards, press material and with the copy of the Public Performance Board Certificate (U -All Audience).”
I feel this is a case of censorship and an infringement on the fundamental rights to freedom of expression.”
In response Jaffna International Cinema Festival Director Anoma Rajakaruna refuted Ratnam’s allegation that the organizers failed to give him a proper explanation as to why they decided to remove the movie from the festival.
“Jude Ratnam’s film came to the festival through a partner of the festival who has presented his film at other locations in the South. The organizing committee has explained to the partner organization about their decision which was then relayed to Ratnam. Subsequently, the partner went into discussion with Ratnam about starting a dialogue about the removal and overall freedom of expression, she explained.
“We have kept the slot allocated for Jude Ratnam’s film on the schedule open. We would have started a discussion on the freedom of expression. It is sad that Jude Ratnam chose to walk out of the discussion to issue a press statement in the South of the country without considering our offer or the implications. If the intended discussion took place, it would have opened up a space not just for the screening of one film, but for many other screenings of other filmmakers as well, in a nation divided by identity politics,”
However, Rajakaruna had mentioned neither a specific reason for the removal of the movie nor who pressured the organizers to do.
Meanwhile, a member of the panel of judges of the festival Dr. Raguram who works at the Department of Media studies, University of Jaffna said that the organizers did not want to censor Ratnam’s movie. The censor board decided to remove the movie from the festival because it is a one sided story about Sri Lanka’s bloody war and it would hurt the people who lose their loved ones because of the war, Dr. Raguram stated.
“We accept and honour Ratnam’s right to freedom of expression and we do not want to deny that. However, his movie is a one sided story about the war. This type of movie is not suitable to be given a slot in a film festival. That is why we decided to remove it from the festival. Ratnam previously had said that he wanted war to end, even if his own people had to be killed. How could we even nominate a movie directed by such a person for a film festival? It would hurt the people who lost their loved ones during the war. We, the judges are not persons who travel back to Colombo after the festival. We have to live in Jaffna and work with these people. We cannot act merely thinking about freedom of expression as those who live in Colombo do,” he added.
Dr. Raguram also did not name the particular community who wanted the movie to be removed from the festival.

Responses
In protest of the removal from screening of ‘Demons of Paradise’ at the festival, Malaka Devapriya, a young movie producer, in solidarity decided to withdraw his film ‘Bahuchithawadiya’ (The Undecided) from the festival.

“Bahuchithawadiya” is Devapriya’s debut effort. Two radio dramas of his were also censored by the government alleging that they hurt religious sentiments of majority of Buddhists of the country few months ago.
“The official responses put forward to justify the rejection are also ineffectual. Taking this situation into consideration, I have decided to withdraw my film ‘Bahuchithawadiya’ from the festival. The basic reason for this is that I cannot maintain double standards with regards to censorship,” he said in a statement.
Another filmmaker Chinthana Dharmadasa said that he also against the censorship of ‘Demons of Paradise.’
I also wanted to withdraw my film ‘Awilena Sului’ from the festival but my producer did not agree with that. Therefore, the film will be screened at the festival but I would not participate in the occasion. I urge everyone not to go watch it at the festival. We can watch it elsewhere and discuss it later, Dharmadasa said.
Veteran film director Asoka Handagama is of a different view on the entire scenario. He says that the Festival Director Anoma Rajakaruna has taken a most difficult decision in order to continue the film festival.
“She had two choices. One of them was ignoring the protests of certain groups in Jaffna and screen Ratnam’s movie. The second was the removal of the movie from the screening line-up to protect the festival. If this movie was screened there was a possibility of turning the entire festival into a battle ground. It would be the end of it. Therefore, Rajakaruna has taken the difficult decision. Now we have to watch as to how
people in Jaffna question this decision.”
Senior Lecturer at the University of Jaffna, Dr. Rajan Hoole, meanwhile, criticizes Dr. Raguram’s stance on removing ‘Demons of Paradise.’
He says, “There is an immense need for people here to be able to hear different views and be exposed other ways of seeing our history, especially the darker side that is assiduously blocked out by our politicians, media, and especially the University. It is only then that they could break out of the propaganda monolith that is intent on keeping us in a kind of political stone-age.”
I am not surprised that Dr. Raguram of the Department of Media studies had ‘visitors’. I immediately sensed the kind of atmosphere where concerted attempts were made in 2014 and 2015 to stop the commemoration of Dr. Rajani Thiranagama at the University and then to stop the discussion of ‘Palmyra Fallen’, my book commemorating Rajani, in the Library Auditorium of the same University.
You had only been asked for a proper explanation of why the film was removed from the schedule. Instead you have resorted to innuendo against the Director Jude Ratnam implying charges that have no substance. The issues involved are so crucial that we expect a higher standard of civic morality from you, Dr. Hoole stresses