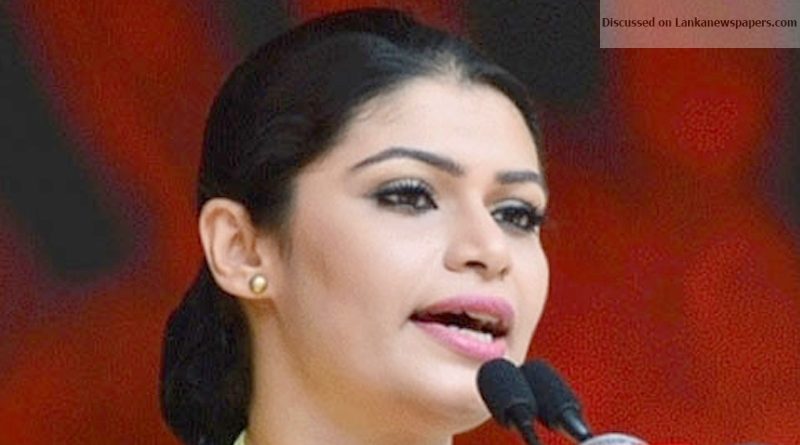 Defence Counsel appearing on behalf of Parliamentarian Hirunika Premachandra informed the Colombo High Court that his client is expecting to plead guilty for her alleged involvement in the abduction of a youth using a Defender.

Counsel Anura Seneviratne appearing on behalf of Hirunika Premachndra informed court that his client is seeking a short cut method to finish off the alleged abduction case.

However, the Counsel who appeared for the aggrieved party submitted to court that his client would seek compensation from the accused if she pleads guilty to the charges. Taking into consideration the facts, High Court Judge Shashi Mahendran directed the parties to formally inform their stance regarding defence’s short cut method on the next calling date. The case was deferred for December 11. On a previous occasion except Hirunika Premachandra and a schoolboy, seven other accused who pleaded guilty for their involvement in the abduction had been given suspended prison sentence by Colombo High Court.

The Colombo High Court sentenced the seven accused to two years imprisonment suspended for 12 years. Apart from the suspended sentence, the High Court ordered the seven accused to pay compensation of Rs.285,000 to the victim. The Court further ordered five accused to pay a fine of Rs.33,000 each for other charges. The eighth accused, a schoolboy (18) was ordered to be released on a bond of Rs.100,000 in accordance with section 303 of the Criminal Procedure Code taking into consideration his age. The accused; Kelum Niranjana, Kasun Malinda, Ruwan Pushpakumara, Mohammed Rizwan, Pasindu Sanjeewa, P. S. Abeysiriwardena, Sanjeewa Kumara and Jeganadacal pleaded guilty to seven charges including abduction, aiding and abetting to abduction and unlawful assembly.

Apart from the abduction charges, the nine accused have been charged on 29 counts by the Attorney General including threatening, assaulting and intimidating the victim Amila Priyankara after being abducted in Dematagoda.

The accused who were indicted are; Hirunika Premachandra, Kelum Niranjana, Kasun Malinda, Ruwan Pushpakumara, Mohammed Rizwan, Pasindu Sanjeewa, P.S. Abeysiriwardena, Sanjeewa Kumara and Jeganadacal. The complainant Amila Priyankara alleged that he was abducted and assaulted by a group of people who came in a black Defender to Dematagoda on December 21, 2015. Senior State Counsel Janaka Bandara appeared for the Attorney General.