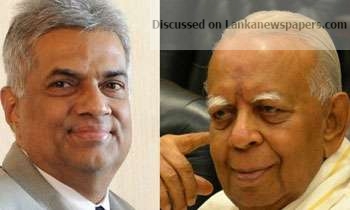 Prime Minister Ranil Wickremesinghe and Opposition Leader R. Sampanthan will hold talks soon to finalize the appointment of members to the Constitutional Council (CC) which makes recommendations to make key appointments in the government sector and the Independent Commissions, it is learnt.

The term of the nominated members of the CC has already lapsed rendering it defunct at the moment. It is a ten member body. The Speaker, the Prime Minister and the Opposition Leader hold its membership by virtue of their office.

Besides, there is one representative to be nominated by the President. For this slot, President Maithripala Sirisena has already nominated Ports and Shipping Minister Mahinda Samarasinghe. There is another slot reserved for the parties in Parliament, not represented either by the Prime Minister or the Opposition Leader.

The remaining five members, including three from civil society, should be nominated by the Prime Minister and the Opposition leader in mutual agreement.

Mr. Sampanthan told Daily Mirror yesterday that he held talks with the Prime Minister before he left for Norway and London earlier. He said he would meet with Mr. Wickremesinghe upon his return to the country soon.