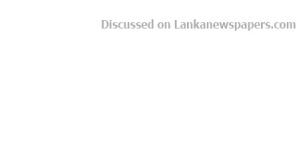 The International Cricket Council has denied sharing any names of players or officials who are under the spotlight of the ongoing investigations into corruption in the sport.

Following a statement by ICC Anti Corruption Unit Head Alex Marshall, the names of several players and an ex-player has been circulated widely.

Responding to an e-mail by Sunday Island, an ICC spokesperson denied highlighting any names.

“We would certainly counsel against speculation of any kind and for certainty shared no names during our meetings in Sri Lanka,” the spokesperson told Sunday Island.

Marshall, the former Head Constable of Scotland Yard was in Colombo earlier this week to continue his investigations. The ICC confirmed that he had met President Maithripala Sirisena, Prime Minister Ranil Wickramasinghe and Sports Minister Faizer Mustapaha .

“We issued the statement because the media had started to become aware of the meetings with government officials. We wanted to ensure that the current series was distanced from that,” the spokesperson further commented.

Earlier, Marshall issuing a statement had said, “We are currently in Sri Lanka as part of our ongoing investigations into serious allegations of corruption in cricket in the country.”

Some reports suggested that the ICC had blacklisted Sri Lanka as the worst offender when it comes to corruption. This was hard to believe as several Pakistani and South African cricketers involved in franchise based cricket had been suspended or banned by local governing bodies or the ICC for corruption.

One of the names that has been highlighted has been that of top order batsman Danushka Gunathilaka. However, it has to be mentioned that Gunathilaka had reported an approach by corrupt elements during the Champions Trophy last year and had been commended by the ICC.

It is believed that the ICC started the ongoing investigations after complaints by insiders holding responsible positions within the national cricket team. The complaint had been made in July last year during the bilateral series against Zimbabwe.

Sources told Sunday Island that Prime Minister Wickramasinghe was handed a two page document on the investigation by Marshall. It was further revealed that after going through the document, Wickramasinghe had commented that it didn’t contain any fresh allegations apart from what has been already known. Sunday Island learns that the Prime Minister had welcomed the ICC to establish an office in Colombo if the corruption allegation were so serious.