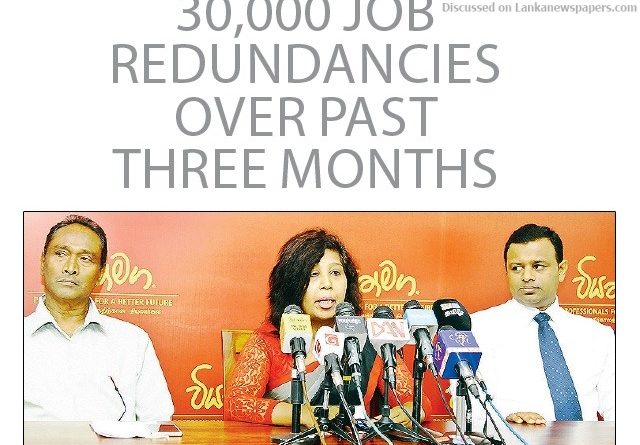 The latest findings revealed that 30,000 employment redundancies have been recorded in the country during the past three months, according to  Senior Lecturer Madhani Herath, of the Department of Economics and Statistics, University of Peradeniya.
She revealed this at a media briefing organized by the Viyathmaga Professionals’ gathering yesterday (7).

She also claimed that the youth unemployment rate has seen a drastic leap from 17.6 to 21.1 percent during the past three months.
“Let alone the Yahapalana Government’s election pledge of creating 1 million employment opportunities, the Government miserably failed in retaining the existing employment status”, she charged.
Meanwhile, speaking at the same gathering, Engineer Harsha Chandrasena said that educated professionals find it difficult to engage in gainful employment in the country. Hence, the present brain drain is inevitable.
“If professionals, such as Engineers remain unemployed in Sri Lanka for over a year, there is a less probability that they would waste their time in the country waiting for employment opportunities. There are lucrative and attractive employment opportunities abroad such as in Australia, New Zealand, Europe and the USA and our professionals tend to migrate due to the unavailability of employment at home,” he said.
He added that the Engineering students who have passed out from the country’s main Engineering Faculties, attached to the Universities of Moratuwa, Peradeniya and Ruhuna, have not yet received employments as Engineers. “For the first time in the history, Engineering graduates remain unemployed. This scenario has not happened before. In the past, the engineering students were given employment as they passed out from the universities. Regrettably, at present, they have to wait longer and waste time after completing their studies.”
He pointed out that there is no rationale in asking the professionals not to leave the country to avoid brain drain, if the Government cannot provide employments for the professionals.