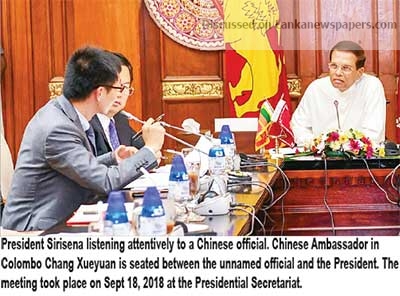 Sri Lanka is yet to receive a two-billion-yuan (nearly USD 300 mn) grant from China as project proposals have not been finalised.

President Maithripala Sirisena revealed that the Chinese offer in late July, 2018, at a ceremony to launch construction of a Chinese-funded kidney hospital in Polonnaruwa.

The Chinese leader has gifted 2 bn yuan to be utilized for any project of my wish. I’m going to hand over a proposal to the Chinese ambassador to build houses in all the electorates in the country,” the President said.

DER: During the Belt and Road Forum in Beijing in May 2017, at a meeting held with Prime Minister Ranil Wickremesinghe, the President of the People’s Republic of China Xi Jinping pledged a grant of RMB 2 billion to Sri Lanka for the period 2018 to 2020.

The Island: Did Chinese embassy and Finance/Foreign hold talks on the Chinese offer?

DER: Ambassador of China to Sri Lanka Chang Xueyuan recently held a discussion with the officials of the Department of External Resources regarding this grant. At this discussion, it was said that Government of Sri Lanka should forward suitable project proposals to materialize this grant.

The Island: Did Sri Lanka receive similar grants previously from China or any other country?

There had been a similar grant pledge announced in September 2014 during the state visit of President of China to Sri Lanka. This grant pledge was for the implementation of projects that were mutually agreed upon between the two countries for the period of 2015 to 2017.

The DER is responsible for coordinating foreign funds received for development projects.

President Sirisena’s Office said that President Sirisena on Sept 18 met Chinese delegation headed by Chang Xueyuan at the Presidential Secretariat to discuss the progress of ongoing Chinese projects and problems faced in the implementation of projects.

The President’s Office said that the lengthy discussion covered all projects with the focus on ways and means to tackle problems. President Sirisena has assured the Chinese that tangible measures would be taken soon to overcome problems to ensure the implementation of projects beneficial to the people.

Ports and Shipping Minister and SLFP spokesman Mahinda Samarasinghe recently told The Island that the government would soon finalise plans for the utilisation of the Chinese grant. The minister pointed out that the Chinese grant underscored the importance of Sri Lanka-China relations.