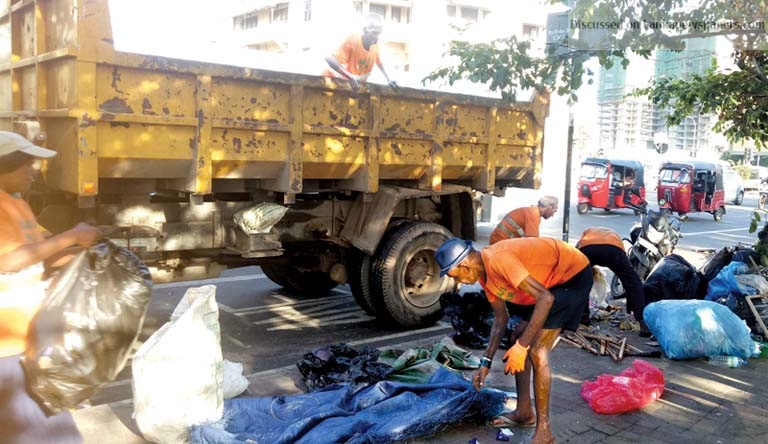 Additional expenses for CMC to clear garbage dumped by protesters:

The ‘Jana Balaya Kolambata’ protest campaign organised by the Joint Opposition (JO) had failed to get the desired outcome and turned out to be a flop while one person had died and 16 people were admitted to the Colombo National Hospital.

“One person who had died on admission to the Colombo National Hospital is said to have suffered a heart attack.

Another person died in an accident in Nittambuwa.He has got down from the bus to buy pineapples on his return from the Joint Opposition protest. He was knocked down by a vehicle while crossing the road and died on admission to hospital.

Although the protest rally was expected to continue until yesterday morning, it ended by midnight on Wednesday.

The Joint Opposition termed the demonstration as one that would topple the government, they did not receive the anticipated crowds. Hence, Mahinda Rajapaksa and the JO came under ridicule and mocking over social media. Meanwhile, the Colombo streets were in a state of disarray with piles of garbage including empty lunch boxes and plastic bottles littering the streets which the protest was held. However, the CMC had to deploy additional workers in order to clean up the streets after the protest ended.

Speaking to the Daily News Municipal Commissioner V.K.A. Anura said that workers generally used over three days had to be deployed to clean up the streets after the protest.

“The streets were littered and we had to deploy additional staff and vehicles in order to clean up the mess that was created. This process required additional expenditure. Even with the additional manpower and vehicles it took us until around 12.00 pm on Thursday to complete the cleaning process.”

In addition, the Municipal Commissioner noted that the protestors had damaged the taps and doors of public toilets and at the Vihara Maha Devi Park during the protest. However, he said that an estimate of the damage caused had not been done yet.