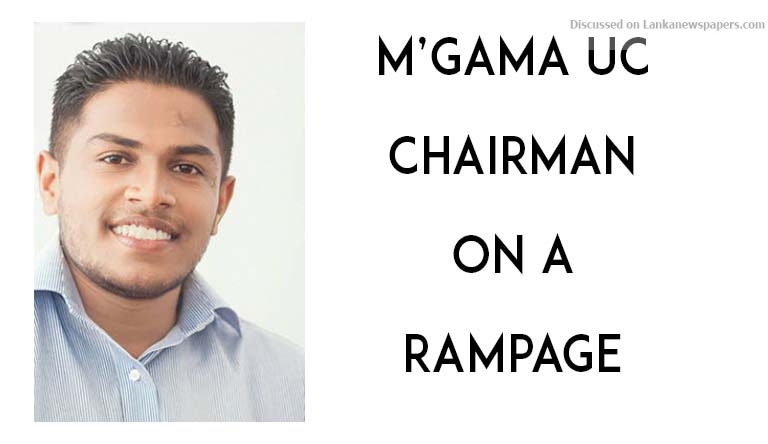 Maharagama Urban Council (UC) employees assaulted by its Chairman Tiraj Lakruwan Piyaratne on Thursday are demanding a public apology from him. The controversial UC Chairman first made headlines when it was revealed that he had displayed a notice asking employees of the UC and the public to address him only as ‘Sir’. While he later denied putting up the notice, he, however, did admit he requested the staff to address him in the manner. He found himself embroiled in yet another controversy this week when it was revealed that he had assaulted four employees of the UC including on 57-year-old man for allegedly consuming alcohol while on duty.

While the Urban Council staffers declared a strike after the incident, Speaking to the Sunday Observer one of the assault victims said the strike action will continue unless Piyaratne admits to the assault. Piyaratne, however, has denied the allegations.

Nevertheless, the council staff will meet tomorrow to decide on further action. According to the victim who wished to remain anonymous, while the health services of the UC will commence today with garbage piling up in the UC area causing a great inconvenience to the public, other sections will continue the strike till Piyaratne gives them a favourable response.

Sources say in the latest incident four members of the Electrical unit of the UC had been having their lunch around 3.30 pm after attending to a repair in the Depanama area when Piyaratne had arrived there. Lakruwan had hauled the employees back to the UC. “He then called us to his office, asked us to kneel and began hitting us” the victim claimed adding that he repeatedly slapped them in the face and over their heads while another was kicked in the back. The victim says Piyaratne accused them of being intoxicated.

“We asked him to obtain a medical report and conduct an inquiry to ascertain the truth but he merely assaulted us” the victim claimed. According to sources from the UC despite the accusations of the staffers being drunk the Chairman has yet failed to initiate a proper inquiry procedure against them. Neither have any Police investigations commenced into the incident. Maharagama Police confirmed that the assault victims have yet failed to lodge a complaint against Piyaratne.

The employee, however, said they are yet to decide on legal action due to fear of retaliation. According to those assaulted Piyaratne had threatened them to not seek medical treatment. “He said his father is a top cop and he will teach us a lesson if we go to the Police or Hospital,” he said.

“Our only demand is that we are allowed to carry out our duties without being treated in such an inhumane manner,” the victim said adding that he must pledge to not act in a similar manner going forward.

Piyaratne contested the election under the ‘Motor Cycle’ symbol with the support of the Sri Lanka Podujana Party (SLPP) going on to become the Chairman of the Maharagama UC.