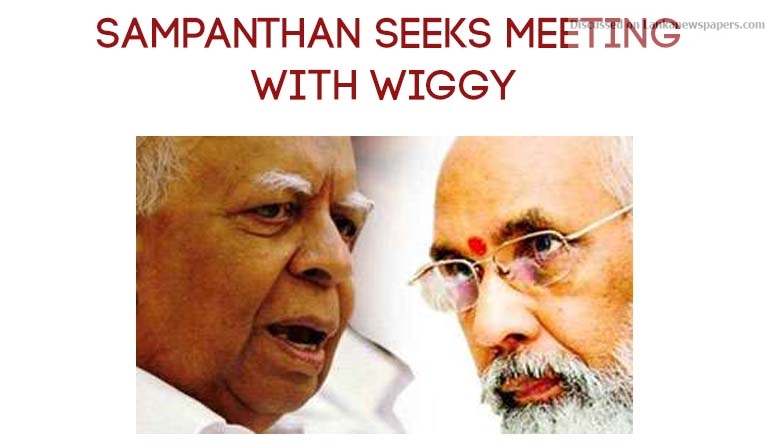 Amidst speculations about a possible split of the Tamil National Alliance (TNA), its leader R. Sampanthan has sought an immediate meeting with Northern Province Chief Minister C.V. Wigneswaran on September 7 apparently to explore the possibility of patching up differences, it is learnt.

There have been open confrontations between Mr. Wigneswaran and TNA MP for the Jaffna district M.A. Sumanthiran giving credence to speculation that the TNA might break up ahead of the elections to the Northern Provincial Council.

Against the backdrop, Mr. Wigneswaran, at a meeting with the Tamil People’s Council (TPC), articulated that he had four options in the event of the TNA not giving him nomination – to retire from politics, to join another party, to form his own party or to join an organization like the TPC.

The TPC, a body of Tamil civil society movements, said it would not allow Mr. Wigneswaran to retire from politics.

Asked whether a party would be formed, Mr. Wigneswaran told Daily Mirror that he had not thought of starting a new party immediately.

“It is not an easy thing to start a new party at my age. These are discussions that are going on,” he said.

However, he said Mr. Sampanthan sought a meeting with him to discuss the latest developments.

“Maybe, Sampanthan will ask me not to start a new party but to stay with his party. We do not know,” he said.

Asked whether some external forces such as India wanted the TNA to remain united, Mr. Wigneswaran replied, “That may be true. I was not consulted, nor was anything said to me. But, that may be true. They may want unity among these people. It all depends on how people are cheated,”

He also said, “I have nothing to hide. My position is that we had come to power seeking Federalism. Federalism is what we have asked for. If it is to be changed, we must go back to our people and get their consent.”