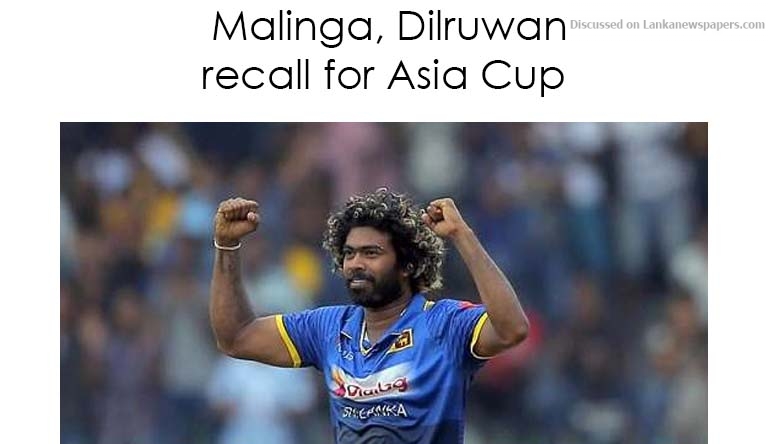 Fast bowler Lasith Malinga and off-spinner Dilruwan Perera have been included in the 16-man squad for the Asia Cup in Dubai this month.

The 35-year-old Malinga, who retired from Test cricket in 2010, has not played international cricket since last September 2017 when Sri Lanka suffered a 5-0 drubbing at the hands of India at home.

His inclusion in the Asia Cup squad, however, comes as a surprise as he has done too little to earn a recall to the 50-over format, even though he has played T20 cricket regularly. He has averaged a staggering 62.30 on his return to the side in 2017 after a long-injury lay-off.

He did, howeer, show a glimpse of his old self when he bowled a brilliant super-over against Team Dambulla, conceding just five runs in a group stage match of the current domestic T20 league. Since then, he has been a pale shadow of himself conceding as many as 207 runs in six matches and claiming just three wickets.

On the other hand, the veteran spinner has been knocking at the door for a while on the strength of his consistent performance with the Test team and also during the T20 league. He is the joint highest wicket-taker in Test cricket for Sri Lanka with 24 wickets.

Dilruwan, who is known for his ability to contain runs bowling at a tight line and length, conceded only 44 runs in two innings during the T20 league, picking three wickets. The 36-year-old last played for Sri Lanka against Bangladesh in March 2017 and was largely considered as a longer-format player. Dilruwan who made his debut in 2007 against England in Colombo has played just 12 ODI matches claiming 13 wickets at 29.53.

The selectors have also recalled seamer Dushmantha Chameera and left-arm spinner Amila Aponso into the 16-man squad but axed wicket-keeper bat Niroshan Dickwella who has been kept as standby. Danushka Gunathilaka who missed the South African series following a six match suspension, has returned to the side.

The team captained by Angelo Mathews includes four-man seam attack in Suranga Lakmal, Kasun Rajitha, Dushmantha Chameera and Malinga and three spinners in Akila, Dilruwan and Aponso. Thisara Perera and Dasun Shanaka are the two bowling all-rounders in the side.
Sri Lanka will kick off their campaign against Bangladesh on September 15–the opening day of the tournament before heading to Abu Dhabi for their second group match against Afghanistan on September 17. The tournament will have Super Four round. The final will end on September 28.