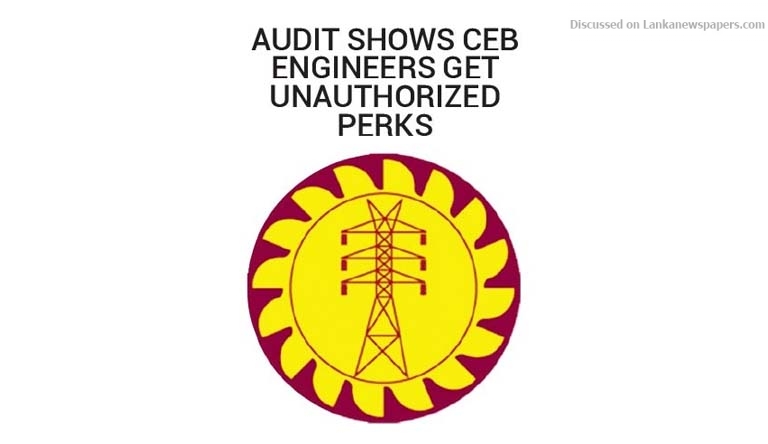 Following an audit conducted by the Auditor General’s Department, it has been revealed that unprecedented allowances and benefits are being given to Ceylon Electricity Board (CEB) engineers, having ignored rules, regulations and circulars.
This audit has further revealed that one of the core reasons behind …the CEB incurring massive losses has been these huge benefits that have been given to its top officials.
A senior engineer, when contacted, alleged that the CEB management had obtained these benefits as they wished without Treasury approval.
However, based on the Monetary Act, No. 38 of 1971, for all State Departments, Statutory Boards and Institutions not provided with Financial and Administrative Independency, in order to give special allowances, the Treasury’s Management Services Department’s approval has to be obtained.
The payment of such allowances has also got to be informed to the National Salaries and Cadre Commission (SCD).
As per a circular issued on 29 April, 2016, by the SCD, the officials of State Departments, Statutory Boards and Institutions can only gain benefits which do not exceed 65 per cent of their monthly basic salaries other than Remote Station Allowances and Hotline Allowances.
But, the audit query has revealed that by June 2017, 226 officials of the CEB had gained benefits which exceed 65 percent of their salaries. The audit query had also disclosed that by December of that year, another 118 officers including engineers had obtained such allowances.
The SCD has stressed that if any worker has been appointed to a certain post, no additional allowances should be given to such persons performing duties other than those coming under their job purview.
The SCD has stressed that a benefit scheme based on work related activities should be formulated, but the audit query has pointed out even that recommendation has not been implemented.
But, having overlooked such recommendations, it has come to light that during the past three years, the top management of CEB had earned large allowances. The audit query has also revealed that the payment of such benefits had been carried out without any justifiable reasons.
The audit query has revealed that among the benefits accrued from this period has been the difficulty benefit, the risk benefit, the pressure benefit, while the CEB Director Board had not even been apprised of this situation.
Meanwhile, the CEB has also continued to pay the Payee Tax and during last year a sum of Rs 678.5 million has been paid and the audit query has noted that a payment of such an sum has been illegal.
The engineers of the CEB are paid an Engineers Allowance of Rs 15,000, while having identified the services rendered by the engineers as special, various benefits have been given to them under different names, the audit has discovered.
These allegedly illegal payments had also been given to the officials at the CEB to retain their services perform work outside the head office as well as at the head office, the audit query has found.
According to the audit, all officers at the CEB had been paid some sort of payments as allowances.
The audit has added that due to the unprecedented nature of giving such benefits to CEB workers, serious issues have cropped up when deploying officers on duty.