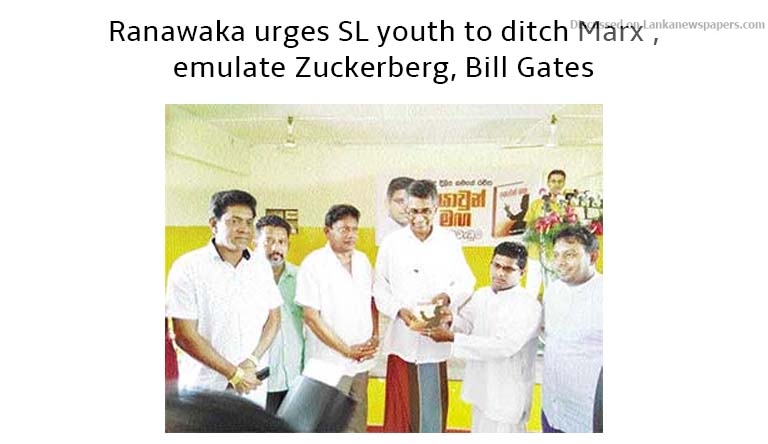 Development Minister Champika Ranawaka says the time has come for the Sri Lankan youth to following Karl Marx and Che Guevara and start emulating the likes of Mark Zuckerberg and Bill Gates.

Addressing a ceremony, at the Sunil Preumbuli hall at the Wilfred Senanayake Ground in Homagama, to mark the launch of a book on Saturday, the minister said that time had come for the Lankan youth to embrace positive changes taking across the globe to facilitate the forward march of the country.

“Some of the main obstacles the country is facing today are nepotism, school ties, family bandyism and class affinities, which have taken precedence over merit. This can be seen in politics, too. Those political traditions should be changed for the betterment of the country. Leadership in politics should be given on the basis of merit and talent not family background.

“There is a new world. Today, the world belongs to the Z Generation – those who were born after 2000. They may not accept the ideals of the past. They may not know the trees and birds and environment we used to know. They are a generation which plays computer games and spends most of their time on smart phones. It is a Facebook generation. They think differently. Some countries have seen them as a political challenge, while some other counties are mulling over bringing in new laws to control them. But what I see is a great political opportunity that we should not miss. It is our duty to create a country which suits the needs of that generation.

“The world market today is made of the ideas of Z generation. The US market is now led by FAANG. That is Facebook, Apple, Amazon, Netflix and Google together. The total worth of those five companies have overtaken the worth of Exxon Mobil petroleum companies, Boeing, Chrysler, Ford, GM and Steel companies together.

“Facebook creator Mark Zuckerberg has revolutionised the world media with his creation now catering to 1.7 billion people worldwide. Two Jewish Ph.D. students, at Stanford University, California Larry Page and Sergey Brin, founded Google in 1998. It is the world’s number one search engine, today. It is a very powerful company today. Their next target is to create a car, a vehicle which is capable of sensing its environment and navigating without human input.

“While the world is making giant strides towards development and embracing new technologies, our youth are still copying Che Guevara and parroting the sayings of Karl Marx. Our university students are backward.”